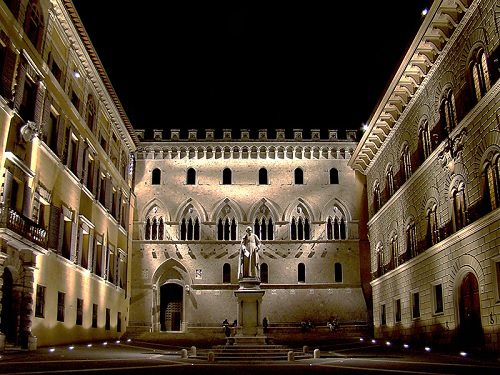 Eighty-eight nonprofit foundations own approximately $27 billion (20 billion euros) in Italian bank stock, although the trade association of the foundations, ACRI, says at that the end of 2012, the book value of the foundations’ total assets had reached 51 million euros. These foundations are a uniquely Italian phenomenon, some with origins in Italian banks going back 500 years. Italian savings banks were considered at their outset somewhat charitable in their functions. During the twentieth century, particularly in the 1990s, Italian law privatized the banks, but ensured that charitable foundations would own significant portions of the banks’ shares, with the ability to reinvest their dividends in social and cultural projects.

According to their trade association, in 2012, the bank foundations’ charitable investments were 965.8 million euros. From that sum, 31.6 percent went to arts and cultural activities, 15 percent to education, 12.9 percent for social assistance such as assistance for disabled persons and immigrants, and 12.3 percent for research. 12.1 percent went to “voluntary activities, philanthropy, and charity,” which looks like a sum largely devoted to the capitalization of other nonprofit and philanthropic institutions, suggesting that many of their other investments might have been directly under the control of the foundations without the need for a nonprofit third-party entity in the transactions.

The foundations, however, are under pressure to loosen their grip on the management of the more than 50 savings banks and others in which they hold stock. According to the International Monetary Fund, the non-performing portfolios of the 14 banks that are at least 50 percent owned by foundations are higher than the industry average. The IMF suggests that those banks that are strongly influenced by foundations are troubled in part because the foundations “are subject to strong political influence.” That probably refers to the composition of the foundations’ boards, which are typically populated by political leaders, business leaders, and representatives of community social organizations, which the IMF seems to think leads the foundations to push the banks into unwise investments.

Italy’s oldest bank—and perhaps the world’s as well—is Monte dei Paschi, founded in 1472. The bank is on shaky footing and facing a possible government takeover through the conversion of the bank’s government debt (bank bailout funding) into government-owned shares of Monte dei Paschi. To raise capital, the Monte dei Paschi Foundation is making moves toward selling part of its 33.5 percent stake in the bank, which could generate some of the capital needed to pay off the government debt by the end of 2014 (though the bank’s recapitalization plan deals with much more than the foundation’s assets, for example, by issuing new shares to be underwritten by other banks).

It’s not quite as simple as all that. The Monte dei Paschi Foundation has resisted giving up its power over the bank for some time. In Siena, where the bank and foundation operate, the bank is the largest employer. A Reuters article from last year cited a regional adage that “the city’s 60,000 residents are divided into three categories: those who work for the Monte dei Paschi bank and foundation, those who are studying to work for it, and those who are receiving pensions” from them.

The IMF’s and perhaps the European Commission’s concerns with the foundation may be political. Siena’s longstanding leftist bent in local and regional politics leads some financial observers, such as Tony Barber of the Financial Times, to conclude that “politics and banks in Italy are too often a toxic combination and should in future keep a much greater distance from each other.” But that is the challenge for nonprofit and philanthropic investors in business ventures, whether new social enterprises or five century old savings banks: how to balance the interests of community stakeholders against the interests of the businesses’ bottom line.—Rick Cohen