The Persistence of Ebola: A Disease of People and of Bureaucracies 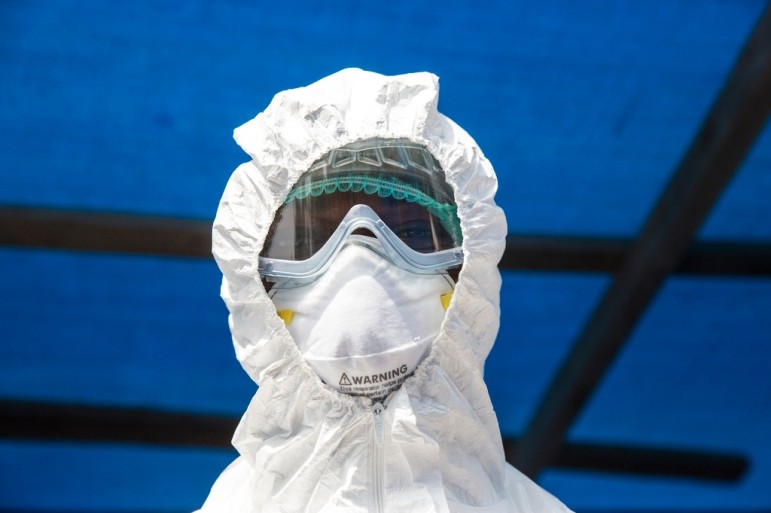 How quickly the public shifts its attention, relegating world-changing crises and controversies to the memory dustbin once the issues appear to be resolved or, in the case of epidemics and pandemics, “cured.” In the UK, a nurse who had treated Ebola patients in Sierra Leone was thought to have recovered from her own previous bout with the disease in January. Last week, Pauline Cafferkey was readmitted to a London hospital, and this week her condition was downgraded to critically ill. With the reemergence of Ebola in Cafferkey, authorities have identified 58 of the Scottish nurse’s “close contacts” and offered an experimental vaccine to 40 of them, with 25 having accepted the treatment.

Other Ebola survivors are reporting other Ebola-related symptoms, notably including problems with blindness. One American survivor, Dr. Ian Crozier, reports swelling and vision problems and that one of his eyes has changed color since he recovered from Ebola. A World Health Organization (WHO) support officer, Margaret Nanyonga, is in Kenema, Sierra Leone, investigating “post-Ebola syndrome” symptoms and has discovered survivors with significant long-term fatigue and aches plus cases of vision difficulties—and at least two of blindness—making resumption of their pre-Ebola lives and work difficult or impossible..

According to Ryan Lenora Brown, writing for the Christian Science Monitor, this week was the first since March of 2014 without a new case of Ebola in Sierra Leone, Liberia, or Guinea. In other words, there have been new cases of Ebola every week for more than a year, but with little or no attention paid to the pandemic by most of the public. Brown’s report from the village of Kpondu reveals the post-Ebola devastation, regardless of whether the disease itself has been, at least for the moment, stanched. Community leaders told Brown about serious concerns regarding the delivery of aid to orphans and survivors. Across Sierra Leone, Brown heard complaints that “international aid organizations, attempting to ease the burden of those who had suffered most from Ebola, were actually making recovery more difficult, breeding suspicion, distrust, and jealousy in tight-knit villages where communal support offered the best chance for physical and psychological recovery from the disease’s traumas.”

Its villages and towns are scattered with slouching signboards announcing a parade of foreign-sponsored aid projects—boreholes and school feeding programs, micro-lenders and community clinics. Some of these, of course, have improved life here, but for every project that’s been effective, the Sierra Leoneans I talked to could point to twice as many that flashed and fizzled.

For me, all of this was a great reminder of how dangerous an emotion compassion can be, how quickly it can slant towards pity, then condescension—how quickly we can forget to ask those we want to help what they really need. That is a danger not only for aid workers and donors, but for journalists as well. It is so easy to write of the poor, sick, and suffering in a way that makes them seem pitiable and worthy of our empathy and open wallets. It’s so much harder to bring the rest of their lives into the same, sharp focus, to remind readers that our subjects, like us, have complex, contradictory, and sprawling lives that resist easy categorization or easy solutions. That they are not simply empty vessels for us to pour our guilt and good intentions into.

The sad reality is that Ebola is not gone. Some of the underlying conditions that led to its emergence and persistence in West Africa still exist. According to B.T. Slingsby, the CEO of the Japan-based Global Health Innovation Technology Fund, a nonprofit that works on developing affordable vaccines, drugs, and diagnostics, “Ebola was very much a wake-up call for our global society”:

Regardless of whether we’re dealing with a pandemic, such as Ebola, or antimicrobial resistance, or with more endemic diseases like malaria or tuberculosis—all of those infectious diseases have one thing in common: Innovations do not come from the free market on its own. But we need these innovations—and therapies, vaccines and diagnostics.

Would that were true. According to Laurie Garrett in a tour-de-force review of the world’s response to the last year’s Ebola epidemic (unfortunately behind a paywall in the September/October issue of Foreign Affairs), as of late last year, “at least 16 more Ebola outbreaks across the Congo basin and Uganda in the interim, the world had not developed any new technical or medical tools for addressing the virus. Treatment was only incrementally more sophisticated than it had been back in 1995, it was still impossible to rapidly diagnose infections, and there was still no vaccine.”

“The global health infrastructure has shown itself to be weak, fractured, prone to infighting, and more interested in searching for technological silver bullets than engaging in the hard slog of social mobilization and classic local public health work,” Garrett observes. “And through it all, the WHO has struggled to remain credible as its financial resources have shrunk, tensions have grown between its Geneva headquarters and its regional offices, and rival multilateral organizations have taken control over much of the global health action and agenda.”

Garrett reports that the much-vaunted U.S. Army commitment to combat Ebola in Liberia and Sierra Leone arrived when the disease was already winding down, resulting in U.S.-built facilities treating few or no patients. But the official U.S. government response was no worse than that of the World Health Organization. Here is what Garrett concluded:

The WHO performed so poorly during the crisis that there is a question of whether the world actually needs it. The answer is yes, it does—but in a revised form, with a clearer mandate, better funding, more competent staff, and less politicization. The agency should be clearly at the apex of the global health architecture, not jockeying for command of epidemic response with other organizations, as happened last year.

The spread of the Ebola disease may have subsided for the moment, though there are gaps in information regarding reports from parts of Africa where the disease might still be affecting people. That’s the part of the issue regarding the disease. Other parts of the Ebola crisis—the sometimes uncoordinated responses of many government and NGO players, the sclerotic response of the WHO bureaucracy, and the nearly invisible health infrastructures of the affected countries—have not been substantially addressed, much less fixed.—Rick Cohen