The True Story of Nonprofits and Taxes

From the outside, it can look like the nonprofit sector, because it is tax exempt, does not contribute to government tax bases at all. That one-sided view wildly misses how this part of the economy works even at the most basic level.

It is true that in 2015, U.S. nonprofit organizations benefited from somewhere in the neighborhood of $137 billion in tax preferences from exemptions and deductions—but at the same time, they sent approximately $243 billion to various government entities in the form of taxes, tax withholding for others, and fees.

In other words, even though they are sometimes considered to be an essentially “tax-free” sector of the economy, nonprofits clearly have deep involvement on both sides of the ledger: as a tax expenditure, in the sense of forgone revenue, and as taxpayers and tax collectors, making substantial contributions to government revenues through tax collection from nonprofit employees and activities. This side of the ledger is not often examined, so this rough estimate is offered as a clarification that nonprofits are by no means tax negative (or even tax neutral).

The two charts below capture nonprofit tax activity in 2015 across a vast array of U.S. jurisdictions—federal, state, and local—in a variety of tax transactions. The IRS reported that charities held over $3.8 trillion in assets and received $2.9 trillion in revenue during that tax year.1 These projections are my initial effort to quantify (in a necessarily gross estimate) the national value of charitable nonprofit benefits and obligations across the various taxing systems. 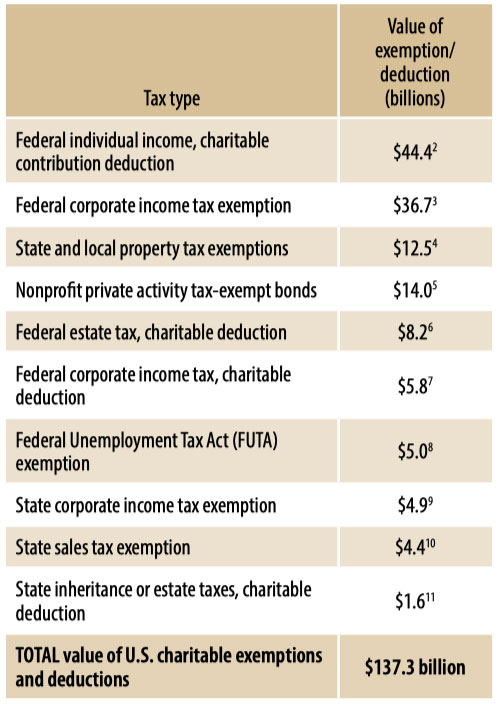 Charitable organizations’ exemption from federal and state corporate income taxes has been the most visible charitable tax benefit, but the actual value of the corporate income tax exemption is probably less than imagined due to the lower net margins of income over expenses among nonprofits. The projected benefit of this part of the exemption will shrink further, to $20 billion in 2018—with the marginal federal corporate income tax rate reduced by the 2017 Tax Cuts and Jobs Act, from 35 percent to 21 percent.

The economic activity generated by nonprofit organizations results in substantial collections and transfers of taxes and generation of fees. The vast majority of total federal revenues is collected through the individual income tax (49 percent in FY 2019) and Social Security and Medicare taxes (36 percent), compared to the 7 percent share coming from corporation income taxes. At the same time, nonprofit employees tend to receive only ordinarily taxed income as compensation, while for-profit employees may have access to equity participation, capital gains treatment, and other individual income tax preferences, lowering their effective rates.

Nonprofits are actively engaged in collection and transfer of taxes from their employees, an obligation with penalties of fines or imprisonment for failure to pay (including for board members!), and are required to pay a variety of taxes and fees to the federal, state, and local governments that are not subject to exemptions—adding up to $280 billion in 2015: 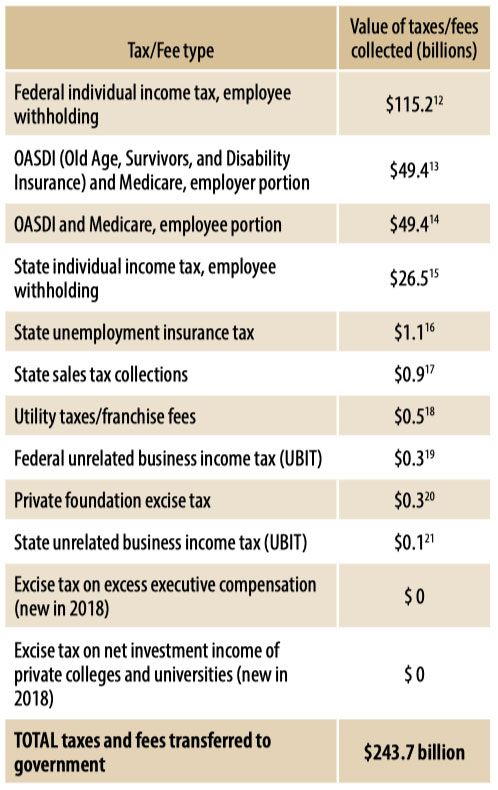 Further Thoughts on the Nonprofit Place in the Tax World

Nonprofits benefit financially from these tax preferences, so by extension they, as organizations, benefit from the public’s expectation that they must truly benefit the public if they are accorded their special status. This can also translate into preferences for government to contract with nonprofits in certain subject areas, such as human services and child protection. Some of the most interesting qualitative and tax comparisons come from activity areas where nonprofits and for-profits compete for the same customers—hospitals, higher education, child care, nursing homes, home healthcare, student loans, low income housing, and so on.

Tax preferences can have a push and pull effect, encouraging particular types of activities. Nonprofits in English-speaking countries have the greatest tax preferences and also have the largest nonprofit sectors. In these countries, the signaling that these organizations are in large part not taxed can encourage charitable contributions and volunteering.

Like other parts of the economy, nonprofits jealously seek to guard their tax preferences (and who can blame them?), and often find themselves in a tug-of-war with different parts of state and local government that also are seeking revenues, as noted by Tim Delaney in “Nonprofit Tax Policy: A Game of Three-Dimensional Chess” (in this section of the magazine). Each side seeks to make its strongest arguments for its role as essential service in a battle of competing goods when it comes to sales and property tax exemptions. It’s worth noting that units of government don’t pay sales or property taxes either, and no one suggests taxing the police department to pay for the fire department (and no one has been able to make federal buildings pay local property taxes).

Another stress point can be found between for-profit businesses and nonprofits, both over UBIT and over property tax exemptions. Claims of unfair competition have been raised historically by the National Federation of Independent Business, resulting in a few line-drawing changes in UBIT applicability. Nonetheless, concerns over the substantial growth in the economic activity of nonprofits—some of it seen as essentially commercial—have not risen as high on the business lobby agenda as they did in the late 1980s.

A simmering issue underneath the various tax conflicts is the sheer growth of the medical and higher education sectors. For much of the general public, these prosperous institutions do not look like charity cases marked by modest salaries, nondescript buildings, and substantial grassroots fundraising. As the medical field consumes a growing portion of the gross domestic product—and so long as nonprofit hospitals are 99 percent fee driven—other taxpayers could well wonder how that industry rates its special preference. When the property tax exemptions were written into most state constitutions (in the 1800s), the colleges and hospitals were just getting started—usually with religious roots, certainly of modest size. Those contentious funding mechanisms PILOTs (payments in lieu of taxes) may well gather support as a timely and sensible compromise for these large institutions.