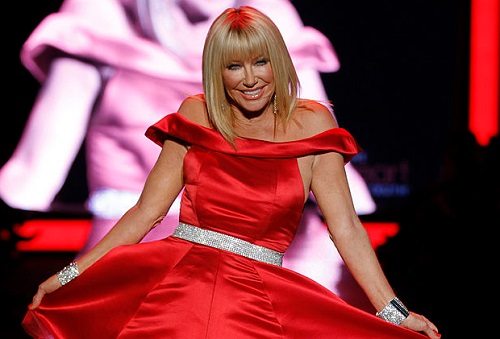 Based on her column for the Wall Street Journal, it’s not clear which nonprofit might want to hire Suzanne Somers as a navigator to help consumers purchase healthcare insurance on the exchanges.

The actress some of us fondly remember as the blonde in the Thunderbird in “American Graffiti” says that having written 24 books on health and wellness, she knows a lot about health care. On Amazon, she is described as having written 16 books, with titles including I’m Too Young for This!: The Natural Hormone Solution to Enjoy Perimenopause, Sexy Forever: How to Fight Fat after Forty, Bombshell: Explosive Medical Secrets That Will Redefine Aging, The Sexy Forever Recipe Bible, and Suzanne Somers’ Eat Great, Lose Weight: Eat All the Foods You Love in “Somersize” Combinations to Reprogram Your Metabolism, Shed Pounds for Good, and Have More Energy Than Ever Before.

After acknowledging that the ACA does something good regarding preexisting conditions, or at least we think she accepts that as a good thing, Somers then summarizes in one paragraph what’s wrong with the ACA system as it somehow in her conception applies to retirees:

“Let’s get down and dirty; the word ‘affordable’ is a misnomer. So far, all you are hearing on the news is how everyone’s premiums are doubling and tripling and it doesn’t take a rocket scientist to recognize that the whole thing is a big mess. Plus, even after Obamacare is fully implemented, there still will be tens of millions of people not covered. So what’s the point? Medical care will be degraded, the costs will skyrocket, and most frightening of all, your most intimate and personal information is now up for grabs.”

Somers seems to ignore that “retirees”, her intended audience, are covered by Medicare, which has been operating since 1965. So Somers circles back to wrap Medicare into her argument:

“So, is affordable care a good thing for retirees? Perhaps over time, it might work if you don’t get too old and you don’t get too sick, and you don’t live too long. But frankly, the economic ramifications with our already swollen debt load don’t add up. Retirees who are on Medicare will suffer the consequences of 700 billions of Medicare dollars instead being used to cover the skyrocketing cost of Obamacare. In essence, less dollars for seniors, means less service. Not fair. The Boomers are going to take the ‘hit.’ In Obamacare, ‘too old’ has limitations of service.”

Critics have had a field day with the Somers analysis, because the original version of her column included quotations attributed to Lenin and Churchill, which the Wall Street Journal couldn’t verify and had to quickly explain away. The real embarrassment, though, is not in her picking up imaginary quotes to show that affordable health care is really a socialist Ponzi scheme. It is letting her incoherently recycle the right-wing playbook’s criticism of the Affordable Care Act while posing as a supposed expert. There are legitimate criticisms to be lodged about elements of the national health insurance program getting underway. The Somers criticisms don’t do it. It appears that she needs a nonprofit navigator to educate her about the ACA, Medicare, Churchill, Lenin, and socialism.—Rick Cohen