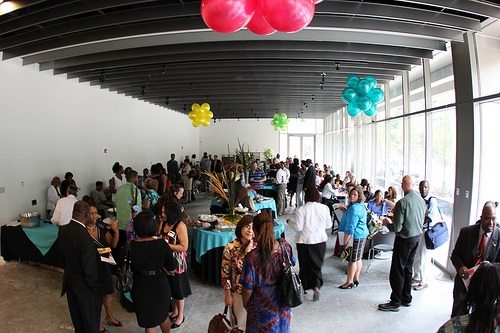 NPQ has written quite a bit over the years about Pittsburgh’s August Wilson Center for African American Culture the site of which is up for bid after a former federal bankruptcy judge, appointed as conservator of the Center, declared that it might be too financially troubled to be saved. The Center is named for the late Pulitzer Prize-winning playwright. but was never able to get free of debt after construction was complete, finally defaulting on its mortgage.

Although there is a sign announcing a sheriff’s sale posted at its entrance, two entities are bidding for the space; one of the two is a group of foundations which is offering $7.2 million bid to buy the center, maintaining it as is, and the other is 980 Liberty Partners which is bidding $9.5 million but with the intention of building a 10 story hotel on top of the site. The receiver in charge of discharging the center’s debts has accepted the Liberty Partners offer but the Pittsburgh Urban Redevelopment Authority says that deed covenants disallow adding to the proscribed use of the building and also building a hotel atop the site without that agency’s approval but that question will go to court on September 29th.

In an op-ed run in the Post Gazette on Monday, Grant Oliphant of the Heinz Endowments wrote that accepting the higher offer would sacrifice the $35 million contributed to build the site and sacrifice, as well, the mission integrity of the facility, “It will gut the center,” he said. “It will architecturally change the center and will have very little space for the activities of an August Wilson entity to carry on its work. And it’s very unlikely to be able to attract additional support because it’s not really a center anymore.”

Matthew Shollar of 980 Liberty Partners responds that they have tried to take such concerns into consideration and that the foundations are stonewalling. “You know it’s quite different from what we walked in the door with in March…And since no one will sit down and review that material, or heaven forbid participate in that process, it makes it quite difficult.”

Schollar insists that, “This building was designed from the get-go to have additional footage on top — whether it was going to be condos or a hotel, it was always perceived as being a tower. And in our proposal, working with the foundations, that could be as small as possibly 40 percent of the building.”

“Our plan will have the building being owned by one entity that will engage professional facilities management, and that most likely will be initially the Pittsburgh Cultural Trust because they have deep expertise,” Oliphant said. “And then a second entity that would be providing dynamic African American cultural programming for the facility and probably acting as its anchor tenant.”

Both sides say that they have support of leaders in the black community but 980 Liberty Partners has a sales agreement in place. If that falls through, the building could very well go to the sheriff’’s sale at which point, any one could purchase it.—Ruth McCambridge