Through Rain and Snow and Sleet, Should Nonprofits Back Up the USPS? 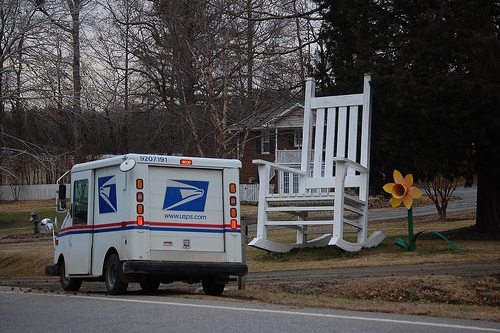 How much loyalty should the U.S. Postal Service get from nonprofits? Since its conversion from the U.S. Post Office Department to the USPS in 1971, it is frequently thought of as a government-created nonprofit—but it isn’t. It is an independent agency of the U.S. government; no longer a federal cabinet department, but neither a government-owned corporation like Amtrak nor a government-sponsored enterprise like Fannie Mae or Freddie Mac. Unlike other federal departments, however, the USPS has the unusual mandate of earning a profit on its operation, which it has not done in 21 of the last 23 quarters, according to Eric Katz, writing for Government Executive. The Postal Service is not government funded for the most part, but is overseen by Congress, which limits what it might do to rectify its history of financial losses.

There are many reasons for its financial difficulties, but in large measure, the USPS delivers to every city and town in America while facing competition from the likes of Federal Express and UPS, which can identify a segment of the mailing industry to focus on—and make money from—while eschewing other less profitable (or clearly unprofitable) market areas. In addition, the Postal Service makes “arbitrary payments” of some $5 billion a year into a fund that will be used to prepay payments to Post Office retirees. No other federal agency, to our knowledge, has quite that challenge and burden.

Once the largest single employer in the U.S., the Post Office has dropped hundreds of thousands of jobs—and is still losing money. Making matters worse, it lost a lot of revenue during the recession, which hit mail volume like everything else. The Postal Service borrowed from Treasury to keep going, but now has a huge debt to repay on top of its already difficult financial challenges.

Labor unions are concerned that the Obama administration’s agenda with the USPS is to solve the agency’s financial problems through privatization. There are 200,000 fewer USPS jobs than just eight years ago. The USPS’s hiring practices now emphasize part-time employees, who tend to be hourly and generally unlikely to qualify for the typical benefits paid by the USPS to full-time workers. They’re also increasingly non-union. In addition, more cuts are on the horizon as Congress debates trying to close post offices, typically in rural communities, and reducing mail delivery from six days a week to five.

In a way, post offices and postal workers—clerks, carriers, mail handlers—are sort of a communications infrastructure for the U.S. By virtue of the USPS, consumers who can’t afford the high prices of FedEx, UPS, and others still have the public agency of the USPS to turn to. Because of the USPS, smaller communities and places in rural America that are typically hit hard by reductions of service proposals still benefit from USPS postal delivery and post offices.

At a time when nonprofits are taking to the front lines in the fight for net neutrality, nonprofits should also pay attention to what is in the cards for the U.S. Postal Service. Despite having taken a battering from the advocates of privatization, the Postal Service still lives true to its creed: “Neither snow nor rain nor heat nor gloom of night stays these couriers from the swift completion of their appointed rounds.” Maybe nonprofits might want to remember that when the public takes potshots at the Postal Service, those pot-shotters are often the same ones vilifying nonprofits for their alleged inefficiency and effectiveness. Nonprofits might want to put the future condition of the USPS on the sector’s agenda, seeing the Postal Service as not quite a nonprofit, but an independent agency that is a kindred spirit.—Rick Cohen