Transparency, Surveillance and the Obama Administration: A Civil Society Concern 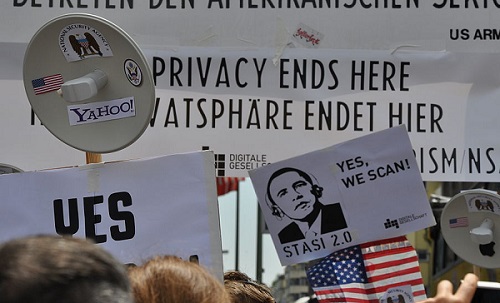 The latest revelations from Edward Snowden concern the expansion of warrantless surveillance by the National Security Administration, authorized by the Obama administration but without public notice, legislative review, or public debate. According to documents provided by former contractor Edward Snowden, currently living outside of the U.S. for fear of prosecution by American authorities for his release of reams of NSA materials, it appears that in 2012, the Obama administration’s Justice Department gave the NSA the OK to engage in warrantless surveillance of domestic Internet traffic in a search for malicious computer hackers. That would seem to violate the changes made in NSA procedures under the Obama administration to target only noncitizens.

President Obama spoke in February at Stanford University about the changes he had made in NSA rules and actions, including his commitment to NSA transparency, but he failed to disclose as part of that transparency the quiet change the NSA made to expand its warrantless surveillance search for computer hackers.

The president’s lack of voluntary openness about the expanded warrantless surveillance practices of the NSA may be consistent with federal governmental practice regarding transparency and disclosure in some areas of governance under the Obama administration. According to Stephen Ohlemacher, writing for the Associated Press, the number of unfulfilled Freedom of Information Act requests has doubled since 2009; the backlog increased from 77,000 in 2009 to 160,000 in 2014. An FOIA request on the expanded NSA program might not have revealed anything—because there had been no public announcement of the program, thus no one in all probability would have known to file a FOIA request on it. Congressional Democrats defended the administration’s FOIA track record explaining that budget cuts had left fewer federal agency staff available to respond to FOIA requests—down to 3,800 in 2014 from 4,400 federal staff deployed full-time to FOIA requests in 2011.

Computer hackers invading the servers of the Internal Revenue Service and the Department of Defense can be scary, but shouldn’t the government have announced its tasking of the NSA to chase them without warrants? Would that have revealed a secret that the hackers wouldn’t have known, or were the hackers likely already aware that the government would be chasing them?

For government agencies and for nonprofits operating in an advanced democracy, the default option should just about always be more transparency, not less. Often the benefits are very powerful, as in the recent instance of the Boston police shooting of an alleged ISIS sympathizer who planned to behead initially anti-Muslim provocateur Pamela Geller and then shifted his aim to beheading local Boston police. Boston police chose to meet with community and religious leaders to show them the video of the police shooting of terrorism suspect Usaama Rahim, contradicting the contention of Rahim’s brother that the victim was shot in the back while talking on a cellphone. The Boston Police Department’s move to rapid transparency is in sharp contrast to the actions of other controversial police departments involving police shootings where the authorities only reluctantly and in piecemeal fashion released videos of the incidents.

Nonetheless, governmental agencies possess ways to say they are supportive of transparency but not actually practice it. Mark Frank writes for Democratic Audit UK that many governments, even those in the UK and the U.S. which are ranked at the top of international open data rankings, sometimes practice what he calls “passive transparency,” which he defines as follows:

Transparency around information that the public needs and wants to use, now and later, is critically important. It then raises the question of why Twitter removed the access privileges of Politwoops, the archiving service that retains tweets issued and then deleted by politicians. Created by the Sunlight Foundation, Politwoops has been tracking deleted political tweets since 2012, but Twitter cut off its access on June 1st on charges that preserving deleted tweets violated Twitter users’ expectations of privacy. But that is the kind of record-keeping and public sector transparency that undoubtedly many people might find very useful and interesting and perhaps necessary in order to track the differences between what politicians say now and what they said in the past on Twitter.

Although too many nonprofits themselves have a spotty track record on transparency, as G. Meredith Betz described in the NPQ Newswire this week about the Memorial Hermann Healthcare System’s rejection of a free philanthropy audit from the Better Business Bureau, the nonprofit sector has a big stake in government transparency. Among the elements of a nonprofit agenda are the following: holding the federal government to its promise of making this administration the most open in U.S. history, a goal of which it has fallen sadly short; calling out the federal government when it pledges transparency as it hides practices like warrantless surveillance from the public; demanding that government not only provide for transparency, but that it promote the databases and other information that the public ought to know about for accessing government data; and rejecting opportunities to become accomplices in camouflaging or preventing the disclosure of government information. If nonprofits recommend those standards for the government goose, the same should be good for the nonprofit gander.—Rick Cohen