Trials and Travails of Nonprofit Health Insurance Cooperatives, Year One

The Wall Street Journal reports that nonprofit health care cooperatives generally missed their projected enrollment targets in the first phase of the Affordable Care Act. Nine of the co-ops did better than expected and fourteen worse. Among the better performers were Freelancers of New York (with well over 100,000 enrollees), CoOportunity Health serving Iowa and Nebraska (with over 75,000), and Consumers’ Choice Health Plan in South Carolina (with over 50,000). On the other hand, some did particularly poorly, such as Community Health Alliance in Tennessee, which enrolled a mere 354 consumers.

The table below from the Wall Street Journal shows the 23 nonprofit cooperatives and their performance so far. From our perspective, it is remarkable that the cooperatives had anything to show, given the innumerable roadblocks they had to confront as Congress made their functions next to impossible—converting upfront grants they received from the government into loans, restricting the use of their government funding regarding marketing, limiting the consumer pools that nonprofit cooperatives could even go after, and so forth. In addition, they also had to overcome the dysfunctional websites of some of the states’ exchanges, except that unlike their competitors, they were start-ups and engaged in building their infrastructure at the same time they were developing and marketing their products. 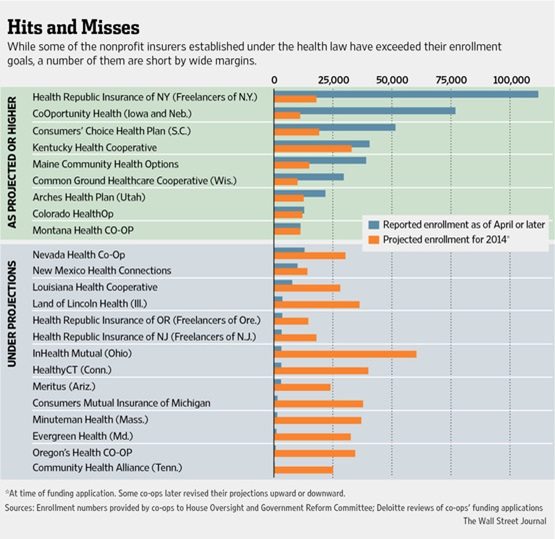 To the House Committee on Oversight and Government Reform, which compiled these statistics, the numbers indicate that some of the nonprofit cooperatives might not be viable business entities able to deliver the health insurance they have committed to. According to Committee chairman Darrell Issa (R-CA), these “enrollment figures to date raise serious questions about how these co-ops plan on staying solvent and that taxpayers will ever be repaid.”

Based on less than a year of nonprofit cooperative operations, Issa seems itchy to pull the plug. That’s silly. A more rational approach would be to stop tossing obstacles in the paths of the cooperatives, allow them to go after markets such as employers’ markets that would open up much larger numbers of potential purchasers, and give them the opportunity to adjust their price plans for more competitiveness. Congress would allow that for private for-profit contractors and vendors. Why penalize nonprofits in this way?

Once again, as we have stated many times before in our coverage of the nonprofit cooperatives’ roles in the ACA, the voice of the nonprofit community’s leadership organizations has been negligible when it comes to standing up for nonprofit health insurance cooperatives and nonprofit navigators, both of which have been harassed from day one of the ACA’s start-up. Nonprofit leadership groups are willing to fight to protect the charitable tax deduction from even an inkling of congressional tinkering, even if the consequent negative impacts are dubious at worst, but standing up for the nonprofit health insurance cooperatives that should be serving millions of underinsured and uninsured Americans seems to be outside their ken.

There is little doubt that turning to nonprofit cooperatives to create price and value competition with big for-profit insurers, a last-minute option by legislators after Republicans scotched the “public option” in the ACA, is hardly ideal. If the nation had chosen a single-payer system, the role of nonprofit cooperatives would be supplemental, not as a competitive price/service yardstick against which to measure the big insurers. Nonetheless, if the nonprofit health insurers are out there and working their tails off, nonprofit leaders should be standing up with them and for them in their efforts to bring a consumer-controlled presence into the nation’s health insurance markets.—Rick Cohen