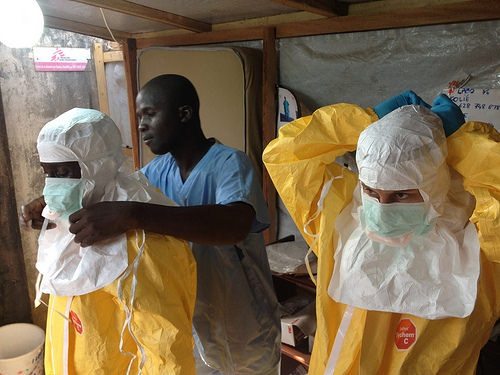 The good news is that the two American relief workers who contracted Ebola in West Africa have been declared cured from their bouts from the virus. One of the two, Dr. Kent Brantly, who worked with Samaritan’s Purse, the Christian aid NGO, declared, “God saved my life.” Both Dr. Brantly and aid worker Nancy Writebol received an experimental treatment in West Africa before being flown to the U.S. where they were treated in an isolation unit at Emory University Hospital in Atlanta.

It is somewhat miraculous that Brantly and Writebol have survived their encounters with Ebola, which kills more than half of the people who contract it. The World Health Organization has declared Ebola a global health emergency and has counted some 1,350 people who have already lost their lives to the disease.

The less good news is that the people in West Africa who have contracted Ebola do not have access—yet—to experimental treatments like those given to the two Americans nor to the kind of quality hospital services (and, probably, sanitation and other qualities) available at a place like Emory. As a result, the epidemic is worsening. The WHO says at least 2,473 people have contracted the disease in four West African nations, but warns that that may “vastly underestimate the magnitude of the outbreak.” An astounding WHO report said that 221 new cases of Ebola were identified in just two days, August 17th and 18th.

The really bad news is the scaremongering around Ebola. Think about the recent tweets from Donald Trump that argued Brantly and Writebol should not be permitted to return to the U.S. because they would bring the disease with them and lead to its uncontrolled spread. Trump obviously watched the movie Contagion too frequently and imagines Brantly and Writebol as real-life equivalents of the character played by Gwyneth Paltrow who brought back a disease from a trip to Hong Kong, had sex with her paramour on the way back to her family, and caused an epidemic that ended up quickly killing a significant proportion of the world’s population.

According to the Guardian, Trump’s fears fit the movie, but not real life. “International health experts agree that the failure to contain the outbreak is due to the broken health systems in the affected countries, which are among the poorest in the world, two of which are still rebuilding following a decade of war,” writes Aminatta Forna. “Simply put, this would not happen in Britain or the US…In West Africa, those most at risk are the very poor, their carers, and health workers.”

Like other diseases that have ravaged places in Africa, Ebola thrives on the weak medical systems in these countries—the lack of clean water, the poor sanitation—and the poverty of these places. It should remind Americans not of the exaggerated fears of Donald Trump, but the need to improve conditions in West Africa so that additional thousands do not have to test whether they might be lucky enough to survive this disease.—Rick Cohen