Understanding the Death of Democracy: It’s Not Really about Trump 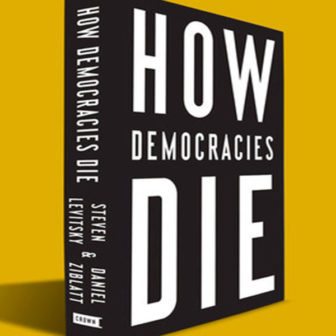 There are many who bemoan the ascension of Donald Trump to the office of president of the United States as the beginning of the end of democracy as we know it. Not so, say Harvard professors Steven Levitsky and Daniel Ziblatt in their new book, How Democracies Die. The process is slow and comes from the inside, according to the authors, and began long before Trump entered the scene.

In his Vox review and commentary on the book, Ezra Klein points to the analysis of Trump as the least interesting and least important part of the book. Klein states, “Trump is a symptom, not the cause, of the problems bedeviling American democracy.”

Both Levitsky and Ziblatt are political historians and have studied the rise and fall of democracies in South America and Europe. They point to the lessons to be learned (or ignored) in these cases and the roles played by those on the inside. The days of military coups and uprisings are, for the most part, gone. Democracies decline as those who lead them change what they stand for. Klein writes:

“2017 was the best year for conservatives in the 30 years that I’ve been here,” Senate Majority Leader Mitch McConnell said this week. “The best year on all fronts. And a lot of people were shocked because we didn’t know what we were getting with Donald Trump.”

The best year on all fronts. Think about that for a moment. If you want to know why congressional Republicans are opening an assault on the FBI in order to protect Trump, it can be found in that comment. This was a year in which Trump undermined the press, fired the director of the FBI, cozied up to Russia, baselessly alleged he was wiretapped, threatened to jail his political opponents, publicly humiliated his attorney general for recusing himself from an investigation, repeatedly claimed massive voter fraud against him, appointed a raft of unqualified and occasionally ridiculous candidates to key positions, mishandled the aftermath of the Puerto Rico hurricane, and threatened to use antitrust and libel laws against his enemies.

How Democracies Die argues that to survive, political systems need parties who place fundamental values above immediate political or policy gain. America’s democracy is currently operating without that protection. History shows that leaves us vulnerable.

And these efforts are usually “legal.” They often come through a legislative process and have approval of the court system.

They may even be portrayed as efforts to improve democracy— making the judiciary more efficient, combating corruption, or cleaning up the electoral process. Newspapers still publish but are bought off or bullied into self-censorship. Citizens continue to criticize the government but often find themselves facing tax or other legal troubles. This sows public confusion. People do not immediately realize what is happening. Many continue to believe they are living under a democracy.

Klein believes that the book’s most relevant lesson for the United States in 2018 is that “Democracies fend off challenges when participants value the preservation of the system—its norms and ideals and values—over short-term political gain.” The anger and bitterness now seen between the two political parties seems to be something not witnessed before. The norms and values of the past seem to be long lost without a path to regain them.

In January, Levitsky and Ziblatt, writing for the Guardian, said, “The guardrails of American democracy are weakening. The erosion of our democratic norms began in the 1980s and 1990s and accelerated in the 2000s. By the time Barack Obama became president, many Republicans in particular questioned the legitimacy of their Democratic rivals and had abandoned forbearance for a strategy of winning by any means necessary.”

Is all lost? The authors and Klein are not ready to throw in the towel. As the authors state, “Two basic norms have preserved America’s checks and balances in ways we have come to take for granted: mutual toleration, or the understanding that competing parties accept one another as legitimate rivals, and forbearance, or the idea that politicians should exercise restraint in deploying their institutional prerogatives.”

Today, this presumption seems to be on shaky ground. Perhaps, as their constituents, our role now is to demand that a level of respect be reinstated in order to preserve our democracy.—Carole Levine