What Happens to Rights of Gays and Women When Catholic Hospitals Dominate a Region? 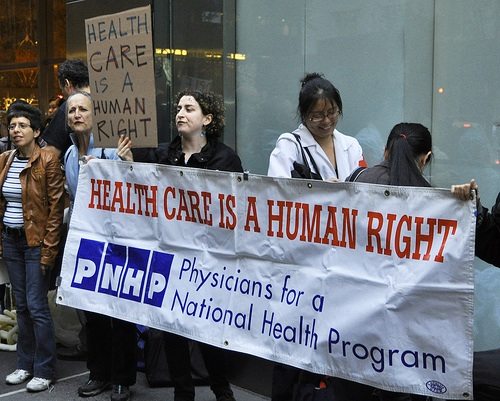 Nina Martin of ProPublica has written a thought-provoking article about the evolving mismatch between the politics of people and hospitals in western Washington State.

She writes that among the recent wave of healthcare mergers and alliances across the United States are a great number in Washington State between taxpayer-supported community hospitals and large Catholic healthcare chains, and that the ACLU projects that almost half of Washington’s hospital beds could be under Catholic influence by 2014. She points out that Catholic hospitals are bound by a 43-page document from the United States Conference of Catholic Bishops entitled “Ethical and Religious Directives for Catholic Health Care Services” (ERD). These contain bans of abortion, sterilization, and emergency contraception for rape victims, as well as in vitro fertilization, artificial insemination, surrogate pregnancy, and anything that remotely resembles assisted suicide.

Local residents strongly support and have backed laws allowing same-sex marriage and death with dignity, and the State of Washington has strong abortion rights. On the other hand, the local archbishop, Peter Sartain, is far from like-minded. He has been pivotal in the oversight of a crackdown on American nuns considered to be too radical and in a campaign against same sex marriage.

As reported here, it appears that the Catholic hospitals have been structuring their relationships with other institutions more often as affiliations, partnerships, or collaborations rather than mergers. This has allowed them a bit more leeway to work around the ERD’s restrictions—but it also has the effect of removing the relationship from the scrutiny of regulators.

For instance, she references Swedish Health Services, a secular hospital system that partnered last year with Providence Health & Services. In a statement to ProPublica, SHS said, “To ensure Providence remained Catholic and Swedish remained secular, the partnership was intentionally structured as an affiliation, not a merger or acquisition.” This separation meant that Swedish Health, not subject to the ERD, could “continue providing the full range of birth control services, including tubal ligations and vasectomies.”

But less than a week after the partnership was made public, Swedish announced that it would cease elective abortions. It gave $2 million to Planned Parenthood to open a clinic nearby, but consumers and advocates would be silly not to worry about what will happen to these workarounds if the Church decides to put pressure on for strict adherence.

The governor, recognizing the potential impact of all this under-the-radar activity, has recently directed the Department of Health to update its hospital merger oversight process, and Democratic Attorney General Bob Ferguson issued an opinion requiring all public hospital districts that offer maternity services to also provide a full range of services, including abortions and birth control. This is a situation that bears watching.—Ruth McCambridge