Whither the Nonprofit Sector in the State of the Union Address? 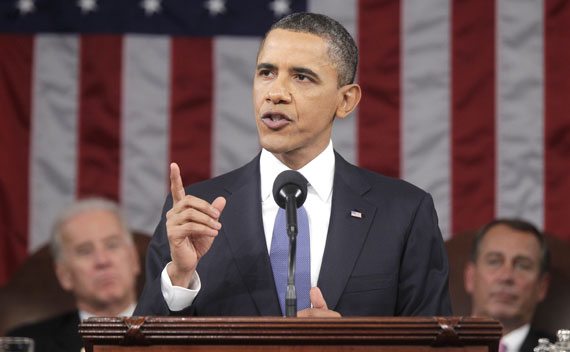 Did President Obama tuck any messages of import for the nonprofit sector into his 7,160-word 2012 State of the Union address on Tuesday?

Nowhere in the president’s text was there a mention of charity, charitable giving, philanthropy, or philanthropic grant making. If listeners looked for hints that the president would revive his proposal to cap itemized deductions—the charitable deduction and the terribly regressive mortgage interest and state and local tax deductions—to pay for social programs such as health care or job creation, they would have to look to this small segment of his speech: “Washington should stop subsidizing millionaires. In fact, if you’re earning a million dollars a year, you shouldn’t get special tax subsidies or deductions.”

That contention was embedded in the president’s discussion of the so-called Buffett Rule, which argues that taxpayers earning a least $1 million should not pay taxes at a lower rate than their secretaries. The president proposed a minimum tax rate of 30 percent for millionaires, roughly twice the estimated amount that Republican presidential candidate Mitt Romney says he will pay this year.

The president did take on tax deductions, but they were deductions for corporations. He proposed eliminating deductions for corporations moving jobs overseas (“outsourcing”) while doubling the tax deductions available to high tech firms that make their products in the U.S. (a timely response to the much-discussed New York Times article on the loss of high tech manufacturing jobs). It would appear that capping charitable tax deductions, the bellwether issue that preoccupied the nation’s nonprofit leadership organizations for much of 2011, has been taken off the table—at least during the 2012 election year.

What about social programs, the domestic federal spending needed to alleviate the hardship and suffering of families in this troubled economy? Like the narrative behind Occupy Wall Street, the president juxtaposed the 98 percent of Americans with annual household incomes below $250,000 and the sliver of America with higher incomes. The domestic programs the president addressed were those that crossed the socio-economic class distinctions within the bottom 98 or 99 percent, the programs that could resonate with everyone in that group—primarily education and jobs. It seems the president’s new narrative is to weld a group identity among the 98 percent, rather than acknowledging differences of class within that segment of the population. In fact, there was an implicit presumption of social mobility within 98 or 99 percent despite the nation’s increasingly encrusted and rigid social class structure. The one mention of “poverty” in the President Obama’s address concerned education: “A great teacher can offer an escape from poverty to the child who dreams beyond his circumstance,” a presumption of Horatio Alger self-improvement jump-started by an inspirational, role model teacher. But there are huge economic and social hurdles among families in that bottom 98 or 99 percent, and they are rarely overcome in our increasingly stratified society simply by hard work, ingenuity, and access to personal nonpareils.

The 2012 State of the Union was a jobs and class speech, touting a mix of incentives and disincentives to stimulate U.S. job growth and retention, but the social programs needed and relied upon by the bulk of working class and lower income Americans were all but invisible in the president’s talk and the nonprofit sector was also missing in action.

At one point in the speech, the president veered close to the geography of 501(c) organizations by calling for actions to fix “the corrosive influence of money in politics.” Was he going to say something—as he did in his 2010 address—about the Citizens United case that unleashed unfettered corporate money into shady SuperPACs and all-but-secret 501(c)(4) tax-exempt organizations? Close, but no cigar. Instead, he called for members of Congress to divest themselves of stock in the industries they impact (but don’t they actually impact all industries in one way or another?). He also suggested prohibiting campaign “bundlers” from lobbying Congress, but it was hardly a frontal assault on the main corruption in the campaign finance system, which would require changes to (c)(4)s.

Maybe the nonprofit sector was built in to the president’s allusion to a peace dividend from the wind-down of military operations in Iraq and the planned withdrawal of troops from Afghanistan. “Take the money we’re no longer spending at war, use half of it to pay down our debt,” the president said, “and use the rest to do some nation-building right here at home.” But he said that in the context of infrastructure projectssuch as rebuilding roads and bridges.And one might have thought that the president would have touched on the crucial role of nonprofits in health care reform, as nonprofit health insurance cooperatives are designed to fill the gap left by the demise of the public option. Instead, he only touted that his “health care law [that] relies on a reformed private market, not a government program.”

Nonetheless, there was a lot of strong, positive content in President Obama’s speech, including pledges that he will hopefully act upon such as approving something like the DREAM Act to put young undocumented immigrants on a path to citizenship. He also discussed pursuing the payroll tax holiday extension for 160 million workers, funding community colleges to turn them into community career centers, stopping the planned doubling of college loan interest rates, clamping down on the deceptive practices of payday lenders and credit card companies, and prosecuting the bankers and brokers whose abusive mortgage lending policies brought the nation and the world into an intractable economic crisis.

In closing, President Obama asserted that, “this nation is great because we get each other’s backs.” The nonprofit sector is a prime mover in the nation’s mechanisms for people taking care of one other, though the sector needs resources such as government grants and contracts to fulfill that role. The president might have explicitly named and credited the charitable sector for its role in the dream of a better, more caring, more civil America. Instead, charities, foundations, donors, and philanthropic grant-makers went unnoticed in the State of the Union speech.