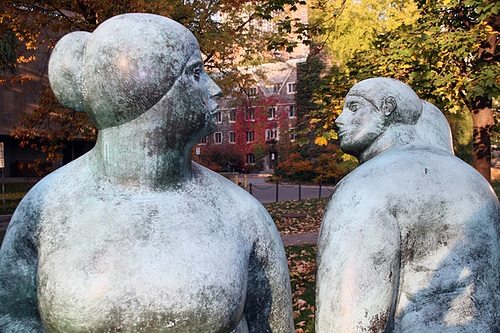 What’s a university to do, asked Tom George, the chancellor of the University of Missouri-St. Louis, regarding how an anchor institution like UMSL might best address the dynamic in St. Louis County in the wake of Michael Brown’s shooting and the subsequent protests concerning policing, racial discrimination, and societal inequalities.

Beyond issuing statements of concern and offering spaces for dialogue and understanding, major community institutions such as universities and hospitals are sometimes flummoxed with determining how they might respond to social dynamics in their communities and regions—not on the spur of the moment, but for the long term, with concrete actions that capitalize on their “anchor institution” roles. The Center for American Progress issued a report today, Eds, Meds, and the Feds: How the Federal Government Can Foster the Role of Anchor Institutions in Community Revitalization, that never once mentions Ferguson or identifies race or racism as a specific issue but remains timely and pertinent for what is happening today.

In Eds, Meds, and the Feds, author Tracey Ross, a Senior Policy Analyst at the Center for American Progress, covers some of the landscape of federal government initiatives that take advantage of the presence and capacity of universities and hospitals in the revitalization of communities. Among the current federal efforts she lists is the Obama administration’s Promise Neighborhoods program (administered by the Department of Education), modeled on the Harlem Children’s Zone, but through the competitive grants process, made available to applicants that included institutions of higher education. As an example, Ross highlights Texas Tech’s role as an anchor institution behind the East Lubbock Promise Neighborhood, a project being implemented in conjunction with the Lubbock Independent School District and a couple of dozen other community organizations.

She also takes note of the somewhat lesser known Choice Neighborhoods program of the U.S. Department of Housing and Urban Development. In the HUD criteria for selecting potential Choice Neighborhoods projects that would support comprehensive community revitalization, one factor is “anchor institution engagement,” to show how local eds and meds provide opportunities for and contribute to neighborhood strategies. Her example here is the role of Seattle University as the lead education partner in that city’s Choice Neighborhoods program, working with the Seattle Housing Authority, the Seattle Public Schools, and the YMCA in a comprehensive strategy linking housing and education.

Quite smartly, Ross also notes the possibilities that the Affordable Care Act could undertake if the nation takes the community health benefit and community health needs assessment requirements of the legislation seriously. “The hope,” she writes, “is that with more insured patients, the hospital can devote more resources toward addressing some of the social determinants of health, such as living in highly polluted neighborhoods.”

One of the roles that Ross outlines for anchor institutions is real estate development, helping distressed communities with residential and mixed-use development. She notes, as an example of a problem, the community resistance regarding Columbia University’s “expansion into Harlem,” which she contrasts with a more positive example of Johns Hopkins Hospital and Johns Hopkins University School of Medicine in East Baltimore, with Hopkins playing a “central role” in a comprehensive redevelopment plan that included the creation of a new public elementary school and an early childhood center. This view of Johns Hopkins in East Baltimore is slightly myopic and ahistorical, given that the university’s past plans were more geared toward urban removal of much of the surrounding neighborhood and were compelled to be more attentive to neighborhood concerns because of the organizing of community-based organizations and political leaders.

Similarly highly touted anchor institution redevelopment strategies, such as the University of Pennsylvania’s in West Philadelphia, cleared and displaced blocks upon blocks of residents. In the competitive world of higher education, top flight universities sometimes found their marketing hampered by students’ and parents’ fears of dangerous surrounding neighborhoods and, in line with the approaches taken by many city governments, adopted strategies more geared to removal than renewal when it came to the interests of existing residents. In many cases of more successful anchor institution development strategies, the engagement of the institutions with community residents in legitimate, more authentic partnerships was essential to ensure that more than the anchors’ concerns were being tended to. Examples that come to mind include Trinity College’s engagement in Hartford’s Southside Institutions Neighborhood Alliance (SINA), which led to affordable housing development in the Frog Hollow neighborhood and the creation of the “Learning Corridor.” Similarly, despite a long history of town/gown tensions, Yale University has partnered with community organizations, particularly in the Dwight neighborhood of New Haven, for productive ventures.

Ross also lists other roles for eds and meds—as employers that can target local residents for job training and placement; workforce developers, as in the case of the Partners HealthCare system in Boston, working on helping young people with preparing for health care careers; purchasers, like Temple University in Philadelphia and the Greater University Circle Initiative institutions in Cleveland, emphasizing buying locally; and as providers of core goods and services.

In its section on building community infrastructure, the CAP report focuses on educational and medical institutions, but communities have a wider array of institutions to draw on for anchor roles. Ross describes the Woodward Corridor Initiative, with its focus on the Midtown area adjacent to Detroit’s downtown. Emphasizing the Live Midtown program, a partnership of the Henry Ford Health System, Wayne State University, and the Detroit Medical Center, Ross describes the incentives offered by these anchor institutions to attract their employees to live in the area, creating the neighborhood population density and urban vitality that so much of Detroit so desperately needs.

Midtown’s revitalization, however, involves many more anchor institutions than just the eds and meds. Key players also include the Detroit Public Library, the Detroit Institute of Arts, Orchestra Hall, and the Charles H. Wright Museum, the nation’s largest black museum. The Midtown strategy, however, is not without controversy. Longtime residents in the area feel at times that the revitalization of Midtown isn’t as much for them as it is for newcomers and outsiders. Moreover, in the case of the Detroit Institute of Arts, the museum has garnered over $370 million in philanthropic and corporate commitments to keep it alive and insulated from the city’s bankruptcy, moneys that some might imagine could have and should have been dedicated to neighborhood revitalization. Sometimes anchor institutions are contributors, but in other circumstances, they can turn into takers.

Oddly, there isn’t a strong element in the report on the role of community-based organizations in working with these anchor institutions and sometimes, by necessity, holding their feet to the fire. Some years ago, Richard Schramm and the late Nancy Nye <a target="_blank" href="http://community-wealth.org/_pdfs/tools/