Fight Between Norton Healthcare and Kosair Charities Gets Ugly 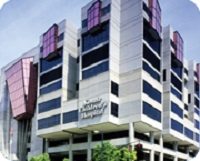 Kosair once operated its own children’s hospital, but closed it in 1982 to help establish the Kosair Children’s Hospital to be managed by Norton Healthcare. An agreement about how donations were to be used was struck at that time, but now a fight between Kosair and Norton has gone public, with Kosair charities alleging that Norton is not sticking to the terms. Kosair is the largest donor to Kosair Children’s Hospital, devoting more than $6 million each year to the facility. Over the span of years, it has given $114 million to the hospital, which is operated by a parent company, Norton Healthcare. But this week, Kosair Charities has filed suit against Norton, saying that it is refusing to provide a proper accounting of funds.

In the suit, Kosair alleges that Norton has improperly enriched itself, and it wants all donations expended in alleged violation of their agreement with Norton to be returned. “We have an obligation to the kids and our donors to make sure the money is being used to help children,” said Randy Coe, president of Kosair Charities. “We don’t want our money to go into the Norton pot.”

Norton responded that “over the last few years, Kosair Charities has engaged in a systematic pattern of raising baseless allegations in an effort to avoid its contractual obligations to the children’s hospital that carries its name.”

Norton spokesperson Thomas Johnson categorically denied that “money designated for Kosair Children’s Hospital was somehow spent for any other purpose or in any other Norton Healthcare facility…It is preposterous for Kosair Charities to suggest they do not know where their contributions go or how they are used. In fact, Kosair Charities gets to designate specifically how a significant part of their dollars are spent using a menu of options we provide to them. The remainder is spent in accordance with the terms of the agreement.”

According to Norton, Kosair Charities is behind by more than $6 million in its pledged gifts while “continuing to advertise and take credit” for contributions to the hospital. The suit also alleges that Norton charges “rack rates” for indigent patients against Kosair donations instead of actual costs or the lower rates negotiated with insurers and the government. For example, according to the suit, in one case a patient incurred charges of $1,526, but Norton applied $9,711 of Kosair donations and the $8,185 difference “went back to Norton and did not benefit KCH at all.”

Kosair Charities’ complaints also include the commingling of funds counter to the agreement, the salary levels of executives, Norton’s inaccurate use of the Kosair name on other medical facilities, and the fact that the hospital is ranked fairly low among other area insitutions, as per U.S. News.—Ruth McCambridge