Fundraising at Wikipedia: Enormously Effective, But…

The Wikimedia Foundation, the fundraising arm of Wikipedia has begun its signature year-end fundraising campaign, which is heralded with a large banner throughout the month of December. As always, it is looking to raise $25 million to keep the site “online and growing.” 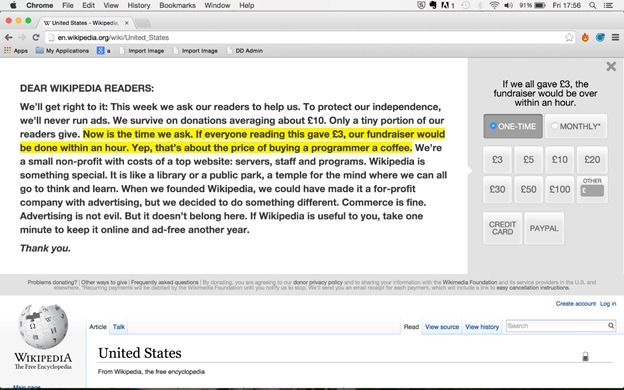 This relatively inoffensive campaign apparently bothers some people when married to the fact that the organization has essentially eighteen months’ operating money in reported net assets ($77 million), including some active in the organization, despite the fact that many large organizations long for such a runway and such support as is enjoyed by Wikipedia.

Perhaps what bothers people is the contrast between what was even only a few years ago seen as such a radical idea and its current stability—at least financially. That stability, however, is precisely what should provide some slack to ensure that the organization grows and diversifies its base of editors properly, while keeping pace with technology.

“Based on guidance from the Wikimedia Foundation board of trustees, our reserve amounts to one year of operating budget,” said Samantha Lien, a spokeswoman for the Wikimedia Foundation. “If there were circumstances that affected our ability to raise those funds during that period, we could end up in an urgent situation—the reserve is a safety net to protect Wikipedia against such a possibility.”

But the base of editors and active wikipedians must tacitly approve the fundraising by not getting miffed about its tone or substance because 1) their labor is what makes the concept work, and 2) they give more often and at higher rates than those who are less involved, so it is important for the fundraising not to run afoul of the ethics of the system—and if those are still being worked out, there may be some uncomfortable moments.

The organization has some understanding of this, since in one instance last year, despite the fact that A/B tests indicated that one ad would bring in more clicks than another, the organization went with the less promising one because its language was more acceptable to Wikipedia volunteers.

There is no question that governance and accountability systems in these large, broad-based systems are a new frontier. At Wikipedia, that plays out in part through its search for a fundraising strategy that’s both effective—it has that covered—and reflects its ethics, not as imposed by one or two loud groups but as commonly understood.—Ruth McCambridge

Update: We thank the Wikimedia Foundation for reaching out to us to clarify the level of assets involved.