Jeffrey Sachs, Sepp Blatter, and the Clintons: The Culture of Impunity 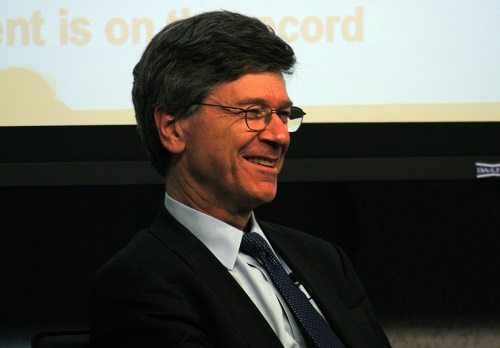 Not that he was in any way personally corrupt, but after Nina Munk’s book about Jeff Sachs’ efforts to eliminate poverty in parts of sub-Saharan Africa (The Idealist), it still requires a deep breath to read his jeremiad about impunity. The only individual he names in the article is Sepp Blatter and, other than FIFA, the only specific institutions he mentions (besides the White House feting big bankers) are JPMorgan Chase and, surprisingly, the Clinton Foundation. As examples of a culture of impunity, Blatter, JPMorgan Chase, and perhaps the Clintons’ philanthropic empire work exceptionally well.

Sachs is certainly right that in modern society, some privileged people and institutions feel free to behave as though they are above the law, operating above the rules of propriety and responsibility. There will be no consequences for their actions; rules are made for others, not for them. That’s why, as Sachs notes, JPMorgan Chase can get fined $20 billion for financial malfeasance but JPMorgan’s CEO walks away with an eight-figure salary at the same time.

“The ability of those who wield great public and private power to flout the law and ethical norms for personal gain is one of the more glaring manifestations of inequality,” Sachs writes. “The poor get life sentences for petty crimes, while bankers who fleece the public of billions get invitations to White House state dinners.”

How does Sachs link in the Clinton Foundation in this analysis?

“When unethical behavior by political and business leaders becomes widely viewed as ‘normal,’ it then goes unpunished by public opinion, and is reinforced as normal—creating an ‘impunity trap.’ For example, with politicians in the United States now so flagrantly and relentlessly on the take from wealthy donors, much of the public accepts new revelations of financial impropriety (such as the Clinton Foundation’s morally dubious financial dealings) with a cynical yawn.”

Sachs is dead on in his analysis of the impunity trap regarding public corruption. He describes how “morally noxious” and “deeply corrosive to wellbeing” it is. He correctly calls for enforcement of the law, such as the indictments of the FIFA reprobates, and protection of whistleblowers as two necessary steps to overcome the impunity trap.

Fundamentally, the answer is in changing the public’s expectation of public sector and business officials. “If the public expresses contempt and revulsion for bankers who cheat their clients, oil executives who wreck the climate, FIFA officials who countenance kickbacks, and politicians who cozy up to all of them in exchange for campaign funds and bribes, illegality for the few cannot become the norm,” he adds. “The first thing any society can and should do is deny respectability to political and business leaders who willfully abuse the public trust.”

Sachs himself is no Sepp Blatter for sure, though his own ideas for the post-Soviet economic transition of Russia under Boris Yeltsin, the so-called “shock therapy” that he promoted as an advisor to a number of Eastern European nations after the collapse of the Iron Curtain, and his poverty-ending efforts in Africa through the Millennium Villages Project have earned him many strident, high-profile critics. Sachs has been rather resistant in many settings to acknowledge the shortcomings of his prescriptions, notably suggesting that the crises that ensued in Russia and elsewhere came because those countries didn’t fully listen to and implement his advice. His own sense of impunity appears to be based on his intellect, that he is smarter and more insightful than his critics, though his critics such as William Easterly, Esther Duflo, and Joseph Stiglitz are hardly lightweights. As Munk’s book implies, it may be Sachs’ outsized ego that makes him resist acknowledging that his advice and solutions for Russia and Africa might not have turned out quite the way he imagined—and not because of the inherent inadequacies of the Russians and the Africans.

The culture of impunity goes far beyond the likes of Sepp Blatter or Angelo Mozilo who think they can make up their own rules. In our sector, it extends to institutions—philanthropic and otherwise—that engage in top-down social engineering, allowing community engagement only within approved parameters and then acknowledging failure only to the extent that the communities they engineered might not have listened well enough or been ready to perform the roles engineered for them. That isn’t to pick on Sachs or Hewlett, but simply a recognition that the “impunity” in our sector seems to rest with those actors whose personal or institutional behavior is that they know a lot more than the communities they aim to help. Many of us have done the same, with community consequences that we acknowledge as failures, but unlike the neighborhood residents, we go home, while they still live there wondering whatever happened to the promises of significant social progress.

Congratulate Sachs for calling out the insouciant and privileged miscreants of our society, for rapping the Obama administration on the knuckles for feting the corporate criminals that helped crash the economy some years ago while they pocketed huge salaries and bonuses, and for questioning the dubious ethics evident in the Clinton Foundation’s choices of donors and partners. But let’s also ask about the impunity of the foundation world, or perhaps the “tyranny of experts,” as Bill Easterly’s book terms it, in which experts with the “right” solutions are sometimes quite disastrously wrong, but get to blunderbuss along with their own sense of impunity.—Rick Cohen