NRA Board Members Collect Money from, Rather Than for, the Organization

NPQ has repeatedly written that nonprofits should attempt to avoid using board members as vendors because it can create a public perception that insiders are essentially protecting their own and one another’s interests over those of their constituents. That particular chicken seems to have come home to roost at the National Rifle Association, adding to the perception that the organization’s inner circle has gone rogue and lacks reasonable internal controls.

The Washington Post has found that of the 76 board members of the NRA, 18 have been paid over the past three years—some well into the mid-to high six figures, with one bringing home more than $3 million. This may answer a few questions about why the board did not push to more closely monitor and respond to lavish top staff spending and financial improprieties. These kinds of conflicts of interest, being paid by a group over whom you are supposed to be exercising oversight on behalf of members, can create not just the perception but a culture of insider benefit. 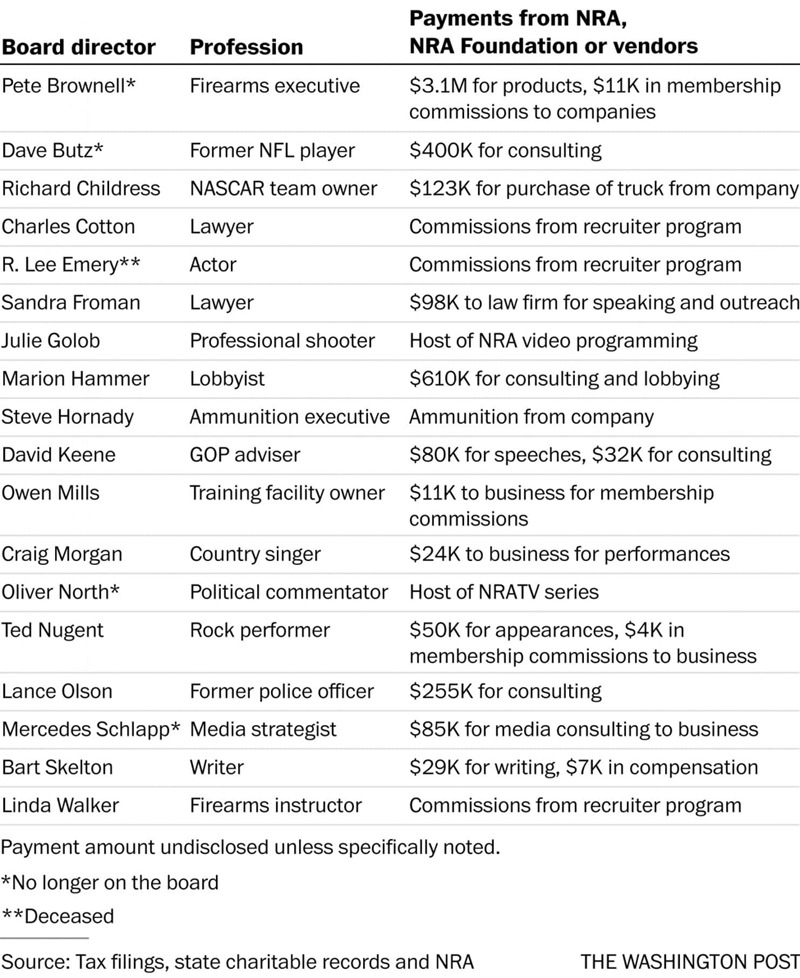 “In 25 years of working in this field, I have never seen a pattern like this,” said Douglas Varley, an attorney at Caplin & Drysdale who specializes in tax-exempt organizations. Varley reviewed the NRA’s federal and state filings from 2016 through 2018 for the Post. He did not see any outright violations of law but, he said, “The volume of transactions with insiders and affiliates of insiders is really astonishing.”

NRA spokesman Andrew Arulanandam, in a defense of the practice, called the gun rights movement “a close-knit community comprised of partners and vendors who understand the issue and are defenders of the Second Amendment.” He said that pressure placed on vendors not to do business with the NRA has shrunk the pool of interested parties. “Therefore, connections between employees or board members and partners are not unusual.”

This argument is patently silly. The organization may be close-knit, but it does have a national base, and the idea that it could not avoid even the appearance of a quid-pro-quo governance system is absurd. Recent revelations about spending choices and its drop-off in membership could well all be part of the same dynamic built on the self-serving habits of the organization’s leadership. NPQ has written about similar setups elsewhere, including at Goodwill Omaha, in an article entitled, “Is a Conflict a Conflict, Disclosed or Not?” That case, which also combined large executive salaries and high-dollar vendors on the board, ended with nearly a clean sweep of leadership.—Ruth McCambridge