President Obama Pitches Healthcare.gov on Funny or Die—and It Works 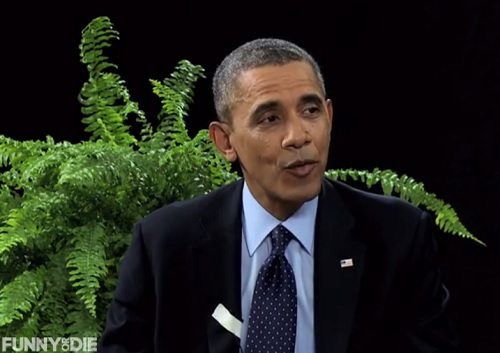 Episode 18 of Funny or Die’s Between Two Ferns has Zach Galifianakis interviewing President Obama. The president does a fine job as the straight man for Galifianakis and the video is already a viral sensation. However, if you think that the president was just feeling like delivering some humor with the star of The Hangover, think again.

“I wouldn’t be with you here today if I didn’t have something to plug,” the president said as he launched into an explanation of the Affordable Care Act and the importance of health insurance for “young invincibles.”

The joke at the end was that the show was shot in the White House Diplomatic Room, which Galifianakis said had always been done—with President’s Bush’s permission. The president handled lots of the jokes well, including Galifianakis’s suggestion that the president locate his presidential library in his home country of Kenya and his question about possibly sending Hulk Hogan or Tonya Harding to Syria in the wake of Dennis Rodman going to North Korea. But the show was clearly an opportunity for the president to plug the ACA and healthcare.gov on a show likely to be seen by the young adult target demographic that the ACA needs.

In a way, it worked. The White House said that the Funny or Die interview is generating a record number of referrals to healthcare.gov, though information on whether the referrals are leading to enrollments is not known. White House senior advisor and chief communications specialist Dan Pfeiffer noted that the “Between Two Ferns” appearance is part of the White House’s continuing experimentation with reaching out to targeted audiences. “We have to find ways to break through,” Pfeiffer said. “This is essentially an extension of the code we have been trying to crack for seven years now.”

Based on his star turn with Galifianakis, the President and his staff might be feeling pretty good with this approach for White House policy outreach. Will the 2016 presidential campaign for Obama’s potential successors be fought through Between Two Ferns guest appearances?—Rick Cohen