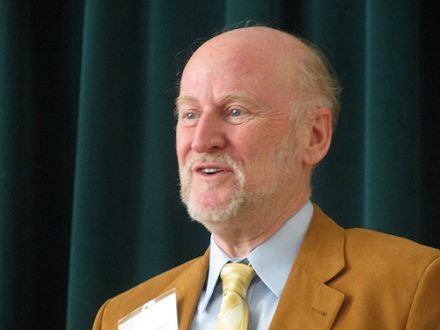 Rocco Landesman, the sometimes-controversial Chairman of the National Endowment for the Arts, is resigning his position according to a report in the Washington Post.

Landesman, who is a Tony Award winning Broadway producer, had vowed to serve only one term and brought a distinctly economic orientation to his leadership post. Early in his tenure he suggested that the theater sector was “overbuilt” for a declining market and the number of artists they served. He followed this inflammatory statement with an interview with the New York Times in which he stated grantmakers might wish to decrease the number of arts institutions they gave to, to control the supply side of art. In a telephone interview to the New York Times Mr. Landesman defended his comments.

“There is a disconnect that has to be taken seriously – our research shows that attendance has been decreasing while the number of the organizations have been proliferating,” he said. “That’s a discussion nobody wants to have.”

He then suggested that foundations and agencies like the endowment should perhaps reconsider re-allocating their resources – perhaps giving larger grants to fewer institutions. “There might be too many resident theaters — it is possible … at least we have to talk about it.”

There were many in the arts world that took the comments with a grain of salt as this analysis suggests but the statements were alarming to smaller production companies.

More recently, at the end of October, the NEA announced a partnership with the Bureau of Economic Analysis that will “identify and calculate the arts and culture sector’s contributions to the Gross Domestic Product.” There are some who believe that Landesman’s hard nosed positioning was not such a bad thing for a period of time when the NEA funding was being threatened by Republicans. It will be interesting to see who succeeds him given the new political landscape.