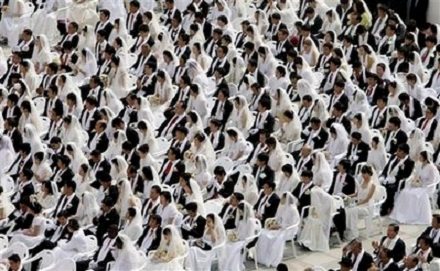 The leader of the Unification Church died last week at the age of 92. Most Americans know the Unification Church for its mass weddings of thousands of couples at a time at well publicized events at Madison Square Garden in New York City or RFK Stadium in Washington, D.C. The husbands and wives (known as Moonies) are generally not introduced to each other until the wedding ceremony and were typically handpicked and arranged for one another by the Unification Church’s self-proclaimed messiah, Rev. Sun Myung Moon (who gave himself the “reverend” title). Rev. Moon may have died, but his Unification Church remains a massive national and international conglomerate, known also for its education and peace programs.

Other than Rev. Moon, we don’t know of other high-profile religious messiahs that have spent 13 months (of an 18-month sentence for tax evasion) in a federal corrections facility in Danbury, Conn. Rev. Moon was then ordered to a halfway house in Brooklyn. He often plowed new ground within organized religion. The Unification Church said that he will still function as the messiah despite his mortal passing. There are ten surviving children of the Moons, though some of them have apparently been at odds with each other and with the messiah himself.

Although the late Rev. Moon went to federal prison as a result of a tax showdown with the IRS, the Unification Church in the U.S. is, like other congregations, a tax-exempt organization that can receive tax-deductible donations. In the U.S., the Church seems to raise most of its “charitable” money though tithing and, at least in the past, through sales of materials such as gifts, flowers and books. Unification Church websites (such as http://unificationnews.com/, http://www.familyfed.org/index.php, and http://www.unification.net/) are long on Rev. Moon’s speeches and positive news stories, but lacking in information about the finances and structure of Rev. Moon’s church. Therein lies the problem.

An IRS spokesperson reached at the National Media Relations Office would not confirm or deny the Church’s tax-exempt status. NPQ’s own search turned up the New York City-headquartered Holy Spirit Association for the Unification of World Christianity (HSA-UWC), which is the formal name for the Unification Church in the U.S. Because it is a church, it files no 990s, bedeviling the ability of the press to gauge the asset value of the religious institution Rev. Moon has left to his wife and various children. The press typically refers to the Church’s assets as worth “billions of dollars.” For tax-exempt purposes, the Unification Church is more than just the church. There is the Unification Theological Seminary in Barrytown, N.Y., the Family Federation for World Peace and Unification International in Tarrytown, N.Y. and other locations, and separate operations of the HSA-UWC in McLain, Va., Philadelphia, and Denver. Additional Unification churches exist throughout the U.S., including one in Kodiak, Alaska.

The number of tax-exempt organizations established and run by the Church or by members of the Moon family is large and difficult to identify, but at least some of these organizations are clearly still around and connected to the Church, such as the Universal Peace Federation, the Women’s Federation for World Peace, and the Professors World Peace Academy (which basically subsidizes and controls the University of Bridgeport in Connecticut). Others seem to be arms of the various anti-communist political operations Rev. Moon established over the years to connect to conservative politicians in the U.S. Of interest to NPQ are grantmaking foundations affiliated with the Unification Church, including the Young Jin Moon Charitable Foundation, with all of its grantmaking going to the HSA-UWC. Another Moon-affiliated foundation, the Universal Cultural Foundation, has directed most of its current grantmaking to the Kirov Academy of Ballet in Washington, D.C. and to performances by the Little Angels Children’s Folk Ballet of Korea, which was founded by Rev. Moon in the early 1960s. Then there is the Washington Times Foundation, the charitable arm of the politically conservative daily newspaper owned by the Moon family.

The Church has also undertaken big business ventures, including the purchase of United Press International through the church’s News World Communications, the New Yorker Hotel in New York City, the Washington Times, and fishing and seafood interests in Massachusetts and Alaska. Overseas, the Unification Church has extensive business relations in a range of countries, including a partnership interest in Pyeonghwa Motors, a small car manufacturing plant in North Korea, one of several relationships (including ownership of the Potonggang Hotel in the North Korean capital of Pyongyang) between the closed, communist society of North Korea and the reportedly fiercely anti-communist Rev. Moon. According to many sources, businesses owned by the Unification Church are the largest supplier of fish for sushi in the U.S.

Most intriguingly, the Unification Church has its own South Korean “chaebol” called the Tongil Group. A chaebol is a South Korean form of multinational business conglomerate, often a family-linked investment vehicle. The Moon chaebol, named for the concept of Korean unification, owns or has ownership interests in a number of manufacturing, travel, sports, and communications businesses. Tongil also supports or has interests in a number of non-U.S. nonprofit ventures in the areas of evangelism (Unification Church entities, mostly), peace and education (the Korean version of the Universal Peace Federation and the Professors World Peace Academy), performing arts (the Universal Cultural Foundation), and sports (including the Sun Moon Peace Soccer Foundation).

In addition to its religious and charitable operations, Rev. Moon’s Church has been quite well connected to certain politicians. In the 1970s and 1980s, the public’s attention to the Unification Church was often associated with its engagement with political figures. Its advocacy for the election of Richard Nixon was not too subtle, and President George H.W. Bush appeared with Barbara Bush at a Unification Church event. The Unification Church was also connected to famous people such as civil rights leader Rev. Ralph Abernathy, Neil Bush (George W. Bush’s brother), Rep. Danny K. Davis (D-Illinois), who co-sponsored an event crowning Rev. Moon the “King of Peace,” and Rev. Al Sharpton, who had his marriage officially blessed by an official of the Unification Church in the late 1990s.

Moonies can tithe to support the Church, and are guided by a tithing manual published in October of 2010 titled Why and How to Tithe – An Educational Guide for Members of the Unification Church. Like Republican presidential candidate Mitt Romney’s well publicized tithing to the Church of Jesus Christ of Latter-Day Saints (LDS), otherwise known as the Mormons, the tithing as a form of charitable donation to the Unification Church is tax-deductible. While few would overtly compare the Moonies to the more established Mormons, Romney’s declaration that he is uncomfortable with disclosure of his persona tax returns due to his tithing to the LDS raises questions about church secrecy regarding tax-exempt donations and assets.

The Time for Disclosure

Will the Unification Church suffer due to the passing of its living messiah? South Korean professor of religion Tark Ji-il suggests that “The Unification Church will continue to be in good shape even after Sun Myung Moon’s death.” However, Tark described in-fighting among the Moon scions for control over the various parts of the Unification Church empire as a “rebellion of princes” that could be destabilizing. Another Korean religious professor, Kim Heung-soo, warned, “There is a high possibility that internal discord will deepen.” More than likely, the hopes for the future of the empire rest on Rev. Moon’s wife, Hak Ja Han, the surviving half of the Church’s “True Parents,” who was seen as something like a co-messiah with Rev. Moon.

Messiah or not, Rev. Moon leaves behind a vast domain that is all but unknowable to the American public that, in a way, subsidizes the Unification Church and its affiliates through federal tax exemption and charitable donation deductibility. It was the congressional investigation of Rev. Moon and the Unification Church that, according to the IRS, “brought the IRS 501(c)(3) exemption for non-traditional churches and religious organizations before the public eye,” based on findings such as “evidence that [the Unification Church] had systematically violated U.S. tax, immigration, banking, currency, and Foreign Agents Registration Act laws, as well as State and local laws relating to charity fraud, and that these violations were related to the organization’s overall goals of gaining temporal power.” That was the IRS’s conclusion—back in 1979—in an official report on the religious tax exemption, but more than three decades later, in the wake of Rev. Moon’s death, the temporal power and assets of the Unification Church remain shrouded by the confidentiality of the same tax exemption.

Set aside debates concerning how much or little connection there might be between Rev. Moon’s Church and mainstream Christianity. Set aside the degree to which some might see the Unification Church as a cult. The fact is the public has no specific rights to examine what the successors to Rev. Moon are going to do with the millions or billions of dollars of assets controlled by the Unification Church, and that is a serious issue of current standards of disclosure.

Even if, as some Unification Church adherents have suggested, Rev. Moon is still overseeing Church activities from his new posthumous celestial abode, the Unification Church should be compelled to disclose exactly what it owns and controls that is currently cloaked behind its tax-exempt status. The time is over for allowing churches operating as multinational businesses to hide their finances from the public. The time is over for allowing donors who give or tithe to religious institutions to use that as the reason for keeping their charitable donations secret—even if the institutions in question are run by messiahs.