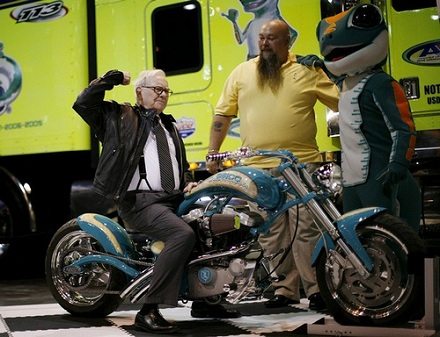 Buffett suggests that the ultra-rich—like himself—are going to pursue investment opportunities even if capital gains rates and ordinary income tax rates inch up. He and his ultra-rich buddies have been doing well in this late recessionary period, thank you very much. He notes that the Forbes 400 list of the wealthiest people in the U.S. hit a cumulative wealth threshold of $1.7 trillion. He calculated the hourly incomes of the 400 wealthiest people in 2009 and came up with an hourly ultra-rich-person wage of $97,000 (based on a 40-hour work week).

But, he opines, one-fourth of the top 400 paid taxes of less than 15 percent and half paid less than 20 percent. And some didn’t pay Uncle Sam a nickel.

So what’s wrong with that? Traitor to his class that he is, Buffett proposes a revision of President Obama’s proposal. Starting with those whose incomes exceed $500,000 (instead of $250,000), he would eliminate the tax cuts enacted by President George W. Bush. He would set a minimum tax rate of 30 percent on taxable incomes between $1 million and $10 million and a 35 percent rate for incomes above that. And, he says, do it fast, even before other needed tax reforms such as dealing with the silly “carried interest” concept that transforms income into capital gains.

Buffett’s rich man apostasy doesn’t end there. He writes, “Our government’s goal should be to bring in revenues of 18.5 percent of G.D.P. and spend about 21 percent of G.D.P.” You know what that means. Last year, the nation brought in 15.5 percent and spent 22.4 percent. His formula would “keep America’s debt stable in relation to the country’s economic output” but would not bring down the national debt. In other words, Buffett doesn’t think the U.S. has turned into Greece or Spain! Maybe he thinks that an austerity regime would do little to shrink the debt but a lot to shrink the economy at a time when it is still teetering.

Why would an otherwise successful guy like Buffett want to raise taxes on himself and his fellow millionaires and billionaires? The NPQ Newswire is seeking interviews with Scrooge McDuck and Montgomery Burns to find an explanation for Buffett’s strange obsession with establishing higher, fairer tax rates for the ultra-rich. –Rick Cohen