To Combat Islamophobia, Start with #StopIslam 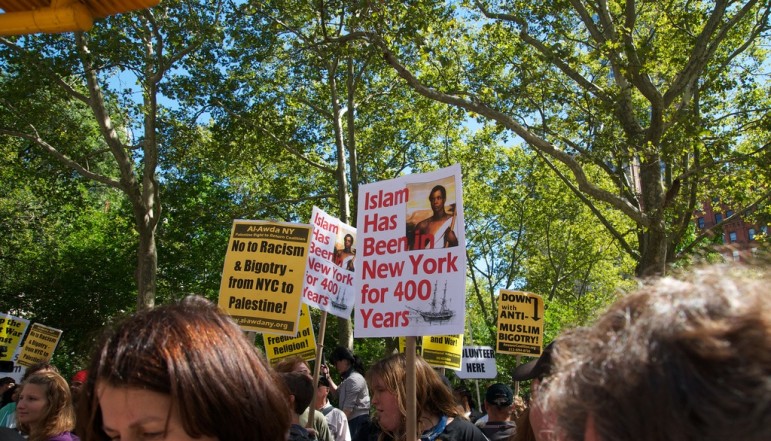 NPQ has tried to provide a voice in the fight against Islamophobia. We’ve written about the available studies on Muslims to help educate our readers. We have condemned terrorist attacks, as detractors often chastise Muslims for not speaking out. We’ve also written to give a Muslim perspective to stories, such as the story of a Virginia school that gave a lesson on Arabic calligraphy. Through our coverage, we have remained adamant that Muslims and supporters must continue to actively fight Islamophobia, whether through education or commentary.

As we expected, just hours after the horrific terrorist attack in Brussels earlier this week, anti-Islam rhetoric appeared in streams of social media posts and through politicians’ sound bites. While Ted Cruz proposed patrols of Muslim neighborhoods—never mind that he didn’t explain what constitutes a “Muslim neighborhood”—Trump thought the attacks affirmed his position to limit Muslims entrance into the country. One man in London tweeted that he apparently approached a Muslim woman on the street and asked her to “explain” the terrorist attack to him. The Twitterverse quickly devoured him for the post.

The attack not only opened another city to the pain of a calculated attack, it also restarted the cycle of blaming Islam and Muslims for the work of terrorists. Several hashtags also emerged in the days following the attack, illustrating that cycle. #StopIslam started trending not long after the attacks, and it became a den for Twitter users to vent their frustrations.

#StopIslam is trending. This issue cannot be ignored or shouted down, #RegressiveLeft. Time to be honest. pic.twitter.com/ufA90ZxopD

Islam promotes peace but it’s in conflict with every single culture. Time to change or #StopIslam pic.twitter.com/QA3Zd4hnlj

I don’t need to “Educate Myself” on Islam. Islam has taught me all I need to know. #StopIslam pic.twitter.com/XO54PzlvsQ

#StopIslam is trending worldwide, there will never be peace in the Western world until Islam is gone

There were even accusations that after several hours, Twitter censored the hashtag because it no longer appeared under the “Trending” sidebar.

Twitter has censored the #StopIslam hashtag. It is no longer appearing in trending topics.

However, if one was to peruse the hashtag in detail, they would find the bigoted tweets were few and far between the tweets focusing on why the hashtag was wrong in the first place. While, paradoxically, the posts kept the hashtag trending, it’s more important that so many posters were actively reacting to the hate messages and posting in an arena where they may do the most good. Specifically, they were posting where “Islamophobes” would congregate.

I said this earlier today, but seeing this ridiculous hash tag made me want to re-share. #StopIslam open your eyes. pic.twitter.com/Y9vXjrLaFc

I just don’t understand how #stopislam was trending worldwide yesterday. Like that actually hurts. My religion didn’t do anything wrong.

I’m a Muslim, if I do something wrong, blame me not my religion. #StopIslam ? NO stop terrorism, that’s the thing that should be stopped.

#StopIslam? Err, my Muslim neighbours have, on occasion, brought me delicious homemade cake. No, I’m not going to stop them.

#StopIslam? Eyh, the muslim boys next door bring me tomyam whenever I’m sick. Why would I stop kind souls like them?

#StopIslam from being stereotyped and misunderstood by Islamophobic and ignorant racists.

Fired up the Twitter on my flight, only to find that something called #stopislam is trending. Shameful.

When you see #StopIslam trending on twitter… Just remember the wise words of Batman… pic.twitter.com/qhcCEau7xQ

What’s interesting is the diversity of the posters, from practicing Muslims to neighbors, friends, and colleagues. It’s important to recognize that diversity to understand how the network of support largely overshadows the bigotry toward Muslims fueled by some current presidential candidates. Ultimately, that network that is so visible on the #StopIslam hashtag is the key to combatting Islamophobia.

While Muslims have no responsibility to persistently condemn any terrorist attack, as if they would feel anything different, Muslims should actively educate others about Islam and find their voice through the intolerance, as many attempted to do through this hashtag.—Shafaq Hasan