Former Defense Sec. Bob Gates and the Boy Scouts: Do the Right Thing! 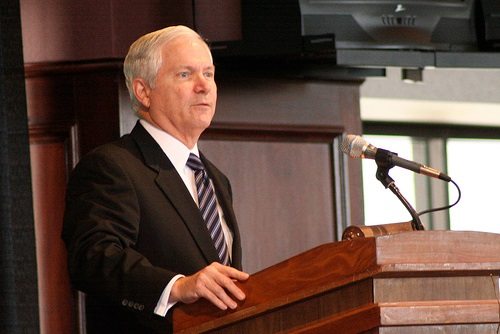 Former Secretary of Defense Robert Gates took on the presidency of the Boy Scouts of America last week, and many took a collective breath waiting to see what he might say or do with regards to the current exclusion of gay adults from scouting. But in his speech to the annual conference, Gates said,

“Given the strong feelings—the passion—involved on both sides of this matter, I believe strongly that to re-open the membership issue or try to take last year’s decision to the next step would irreparably fracture and perhaps even provoke a formal, permanent split in this movement, with the high likelihood that neither side would subsequently survive on its own. That is just a fact of life, and who would pay the price for destroying the Boy Scouts? Millions of scouts today and scouts yet unborn. We must always put the kids and their interests first. Thus, during my time as president, I will oppose any effort to re-open this issue.”

And yet it may not be up to Gates whether or not the issue is reopened. Pressure is growing from funders, scouts, and others, and a declaration that the question cannot be brought up during his tenure is a bit provocative, a throwing down of the gauntlet in front of what has been a very successful antidiscrimination movement. We will be interested to see what happens next.—Ruth McCambridge