On Monday, September 12, 2016, Broadway’s second annual Voices for the Voiceless special event will benefit You Gotta Believe, an agency that connects older youth in foster care with permanent families before they age out of the system. At last year’s inaugural event, Tina Fey, Tituss Burgess, Rachel Crow, Jane Krakowski, Alec Mapa, Darren Criss, and many other Hollywood and Broadway celebrities joined in on the fun and fundraising as more than 1,000 people gathered at the St. James Theatre in New York City to raise support for this worthy cause.

Until last year, You Gotta Believe did not have an annual event. It didn’t need one. A funding crisis transformed the agency.

You Gotta Believe, aka The Older Child Adoption and Permanency Movement, Inc., is a homeless prevention program for teens and preteen children in foster care. You Gotta Believe works in the New York City-area and Long Island to advocate for and prepare long-term housing and support for young people in foster care before they “age out” at the age of 21. New York City’s Administration for Children’s Services (ACS) consistently provided more than 40 percent of the agency’s budget, about $700,000, for 13 years. In early 2015, new leadership at ACS reviewed all the agency’s contracts and made severe cuts to the budget. Today, You Gotta Believe receives only 10 percent of its annual revenue from ACS and other government contractors.

“A lot of people who saw what was happening were very vocal about this being a very necessary service,” said Susan Grundberg, executive director and CEO of You Gotta Believe. Among those who took notice were Broadway actor and Sirius XM radio host Seth Rudetsky and playwright James Wesley. They started an online petition on Change.org to raise private support for You Gotta Believe, which led to the first annual Voices for the Voiceless being organized in June 2015.

The event raised more than $500,000 for You Gotta Believe. The event also made friends for the charity in high places. “We are starting to see more traction in city council because we got awareness and exposure,” said Grundberg.

Most nonprofits undergoing such deep and abrupt funding cuts as did You Gotta Believe would not likely believe they could bounce back so quickly and confidently. At best, most nonprofit leaders would imagine that it would take years to replace government funding with private sources, if they ever could. But the community came together for You Gotta Believe, and its executive director and CEO was and remains optimistic.

“It was good because every system needs a hard look, but [the lost contracts] created a big gap financially. But it really created an opportunity for us. The contracts weren’t in sync with our mission, and it allowed us to get back to our mission,” Grundberg said.

When it came to fundraising specifics, the organization changed its approach. “Our board, staff, and funders all got together and came up with a plan that would allow us to be true to our mission, and to create a greater diversity in our funding,” Grundberg said.

The organization turned to the influence of crowdfunding and private sector investment. “We raised money by raising awareness and enthusiasm about this. We got press and it really kind of jump-started our work. That helped us get individual people interested, and corporations,” Grundberg said.

Other new initiatives resulting from the initial crisis include a new fee-for-service model for some of the agency’s programs. Other foster care agencies are now partnering with You Gotta Believe. “We just got more aggressive in institutional outreach for funding. People are interested in funding something that has a transformational goal, and that is our goal,” Grundberg said.

Of course, every enterprise model carries with it its own headaches. Now that You Gotta believe has attracted a pool of supporters, will it be able to sustain them over the long term? Only time will tell.—James Schaffer 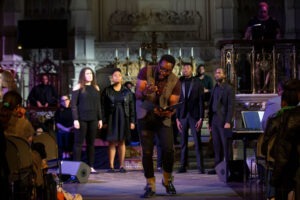