The preservation of strong journalism in the United States and around the world has been a recurrent news story in itself, particularly in an era of “fake news” and algorithms curating news feeds on social media platforms. In the wake of diminishing advertising revenue and changes in audience, some newsrooms are turning to philanthropy, as has been covered by NPQ in the past. One problem, also covered by NPQ, has been a tendency of donors, particularly foundation funders, to focus on “shiny things,” or projects that may be interesting on their own but do not form a coherent or sustainable plan to support journalism.

One method to combat the sustainability issue could be to empower newsroom staff to fundraise on their own, as was highlighted in a recent report from the Institute of Nonprofit News (INN). This report discussed a pilot study in which eight nonprofit newsrooms, which started with donor bases of very different sizes, invested time and resources into major gifts coaching and fundraising initiatives, along with support from a $40,000 grant from the Park Foundation. The study’s aim was to identify “whether the rate of major donor giving could be meaningfully improved.” 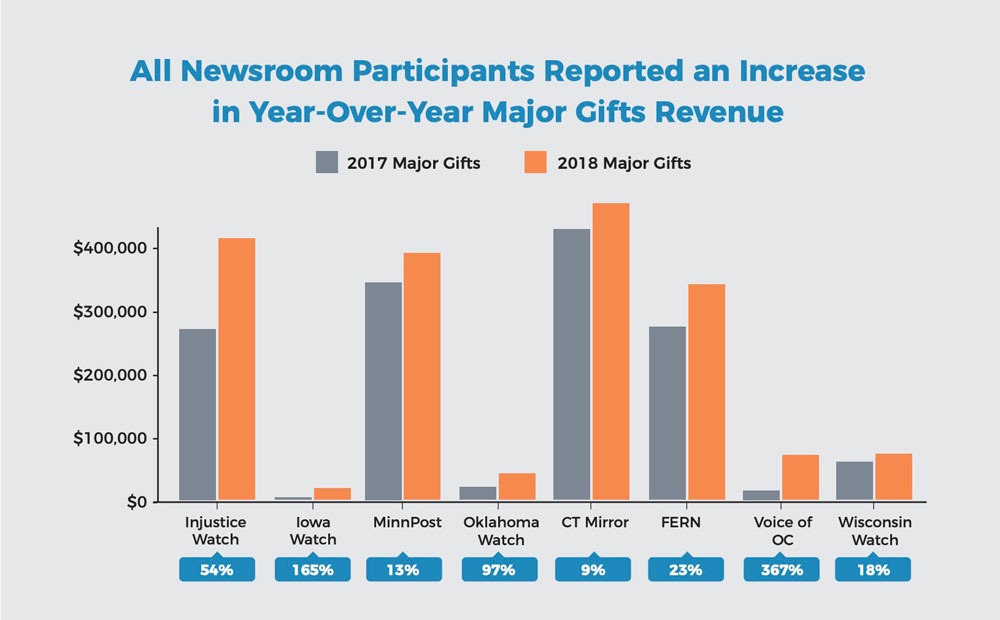 The newsrooms involved in the study included Injustice Watch, Iowa Watch, MinnPost, Oklahoma Watch, CT Mirror, Food & Environment Reporting Network (FERN), Voice of OC, and Wisconsin Watch. Each newsroom was required to commit two employees and $3,000 to the project, in addition to the support from the Park Foundation. Diane Remin, founder and president of MajorDonors.com, served as a coach, and assisted the newsrooms with coming up with “mission-and-needs messaging, use tools like DonorSearch to analyze their donor base, and…strategy for major donors going forward.” Essentially, the coaching built on the idea that fundraising, like journalism, is a type of storytelling process.

According to INN consultant Lindsey Melki, in return for their investments, all of the participating newsrooms “increased major donor funding, ranging from nine percent to 367 percent increases.” These efforts led to a total of $1.7+ million in net new revenue, which far outpaced the initial goal of $80,000 set in spring 2018, at $10,000 per newsroom. Those are pretty high returns for investment, considering the average initial investment per newsroom was under $10,000.

As a result of these findings, INN contends that major gift outreach is an essential part of start up for nonprofit newsrooms. This is in line with INN’s annual index of its 230+ members, including a survey of journalism finances and operations, which was released earlier this year; in it, INN finds that individuals and families “donate nearly 40 percent of all the revenue going to news nonprofits” and “for the first time in studies of the field, foundation funding of nonprofit newsrooms fell below 50 percent in 2018.” These findings thus indicate that the role of individual donors is very important in sustaining increases in revenue, and that outreach to these individuals may be a good use of time and resources, if a similar ROI can be expected as was obtained in the pilot study.

For some of us, it may be difficult to imagine smallish nonprofit newsrooms further tasking staff to fundraise. The results of the pilot study are hopeful, however.—Kristen Munnelly