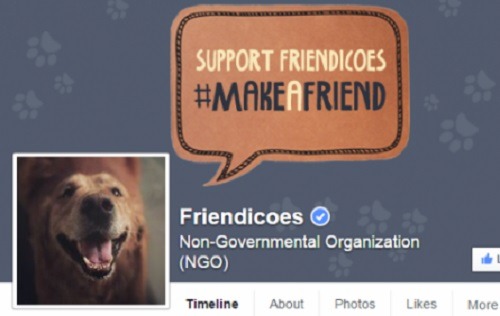 A Delhi animal charity posted its plight and #makeafriend on its Facebook page and a heartwarming video on YouTube.

It was soon on its way to raising Rs 2 million ($30,000) via the online platform BitGiving. Since then, it has increased its target to Rs 4 million and added in a “crowdspeaking campaign,” Thunderclap, which works like an “online flash mob”—posting the campaign across various social media channels.

The charity would not, however, have found itself in this fix were various municipal corporations of Delhi to pay it Rs 3 million for spay/neuter programs conducted on their behalf, according to some sources.

Friendicoes-SECA (Society for the Eradication of Cruelty to Animals) was begun in 1979 by a group of Delhi school children. It grew beyond their wildest dreams to become one of India’s biggest and best-known animal shelters. Today, it has more than 2000 animals under its care. Its headquarters is in New Delhi, with a shelter-cum-clinic in South Delhi, a country sanctuary in Gurgaon (a fast growing commercial city that abuts Delhi) and two animal birth control centers in East and West Delhi respectively, Friendicoes runs ambulances for distressed strays as well as a spay/neuter program and re-homing hundreds of homeless puppies/kittens and abandoned pets. The charity employs around 115 people and costs about $450,000 a year in salaries, food, and medicines.

When the cash crunch was realized, Geeta Seshamani, co-founder of Friendicoes said, “We are in a situation where we can’t afford to pay for food or medicines. We also had to discontinue the night ambulance.”

Along with the social media campaigns, a bunch of college students sprang into action to begin a collection drive, accepting materials such as blankets, old collars, rice, milk, biscuits, antiseptic liquids, and other dog-related items. The items collected will be distributed to Friendicoes and other smaller organizations.

In another initiative, Shruti Chadha, who runs a digital marketing firm in Delhi, threw in her support. She and photographer friends plan to stage an exhibition at Summerhouse, a fashionable restaurant in Delhi. They will exhibit framed photos of rescued animals at Friendicoes, all up for sale. “The proceeds will go to the NGO,” she says.

Seshamani says, “I am overwhelmed by the initiatives. I also got a call from clothing label Vajor. They are creating t-shirts to save the NGO, and the proceeds will go to Friendicoes.”

A petition on change.org asking the corporation to pay up is also in full swing.—John Godfrey