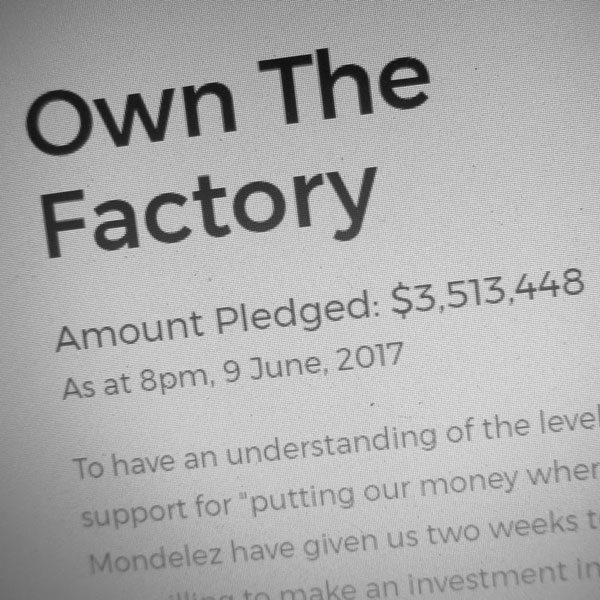 In February, the American food company Mondelez International announced that it was closing its 80-year-old Cadbury chocolate and confectionary making factory in Dunedin, New Zealand. Jim O’Malley, a former pharmaceutical industry executive and a current member of the city council, and a team of local volunteers sprang into action with their “Own the Factory” campaign. The goal was to raise NZ$20 million to keep the factory—and its 350 employees—thriving in New Zealand’s oldest city.

Following a public rally and media interest, they gathered nearly NZ$6 million in pledges. But that was not nearly enough of a promise to purchase the factory. Undeterred, they then planned to purchase OCHO (Otago Chocolate Company), a local craft “bean-to-bar” premium chocolate maker, with a new crowdfunding appeal. Their Dunedin Manufacturing Holdings Incorporated Society (DMH) would drop confectionary making and scale up OCHO, thereby fulfilling its mission to keep chocolate manufacturing jobs in Dunedin. They used the PledgeMe platform with of a goal of raising NZ$1,800,000—enough to buy the company, expand and upgrade its manufacturing equipment, and to hire the initial employees, some of them ideally those who were laid off by the closing of the Cadbury factory.

The renewed Own the Factory crowdfunding campaign received more than NZ$1 million in pledges within a few hours the first day, and by 2:55 PM the second day, they surpassed their goal. Pledges automatically halted at NZ$2 million, the limit set by New Zealand law for all crowdfunding sites. This campaign was the quickest in the site’s history to reach the NZ$2 million mark and had the greatest number of individual pledges.

The 3,570 “shareholders” from across New Zealand and internationally (shares cost NZ$100 each with no one investor owning more than 11 percent) are rewarded with a lifetime 20 percent discount on OCHO products. The average pledge was NZ$700.

Liz Rowe, owner of OCHO, said she had expected the fundraising effort to take weeks, not days, and the groundswell of support showed how important chocolate and jobs were to the people of Dunedin.

“Saving some of those jobs was a huge impetus,” said Rowe. “One of the values of the new company is to create as many jobs as possible.

Crowdfunding innovations are regularly examined by NPQ, from universities and Olympians to museums deploying the practice. This campaign was a bit different, but that it was a venture rather than a charity made it no less exciting to watch.

Here, as in the classic children’s novel Charlie and the Chocolate Factory, a merchandising gimmick like the placing of the five golden tickets into candy bars tests the integrity of the winners. The winning investors took a magical journey filled with adventure and lessons learned along the way, not to mention a lifetime supply of (discounted) candy. Jim O’Malley and his team of volunteers saw a community need, sought to meet it, failed, regrouped, and then soundly demonstrated to the world that their Dunedin Manufacturing Holdings Incorporated Society could find the wherewithal to help look after their city’s residents and livelihood. Amid the stories we usually write about here at NPQ, this is truly a magical one.—Jim Schaffer