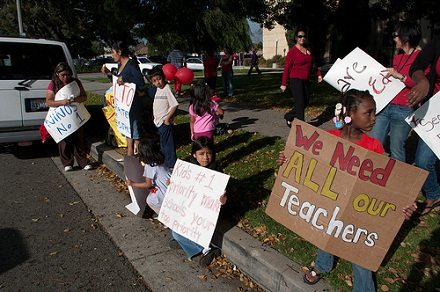 In the latest move to disrupt the “status quo” in public education in California, Students Matter, a newly formed nonprofit, filed a lawsuit against the State of California and other defendants seeking to overturn five laws that “govern teacher tenure rules, seniority protections and the teacher dismissal process,” the LA Times reports.

Though the lawsuit challenges public teacher employment practices on a statewide basis, opposing parties in Los Angeles, home of the second-largest and most diverse school districts in the country, have highlighted the key issues at stake. Los Angeles Schools Superintendent John Deasy, a supporter of the lawsuit, stated that it “is aggressively going after long-term issues which have thwarted the rights of students to a high-quality education.” Proponents in this camp argue that two years is insufficient for awarding tenure to new teachers, that long-term effective teaching capacity takes more time to demonstrate, that it takes too long to layoff ineffective teachers, and that the practice of dismissing the most junior teachers first (as opposed to basing dismissals on teacher quality) during a budget crisis is flawed.

The California Federation of Teachers leads the charge against the new lawsuit. Joshua Pechthalt, the federation’s president, remarked, “We should be fighting like crazy to make sure schools are not laying off any teachers, except those who shouldn’t be in front of a classroom.”  According to the LA Times, Pechthalt insists that existing laws enable school systems to deal with problematic teachers if those school systems are given adequate resources and use those resources correctly.

Deeper tensions arguably exist between traditional public schools and charter schools, and union and non-union teachers. This conflict was highlighted by L.A. school board member Steve Zimmer’s observation that “What matters to the folks who fund this [lawsuit] is not students, it’s eliminating public sector unions.”

The parties involved in this current debate provide important insight into the drivers behind the larger education reform movement. The founder of Students Matter, David F. Welch, may be a relative newcomer in the nonprofit and education sectors, having spent most of his career as a technology entrepreneur in Silicon Valley before more recently getting involved as an investor in the New Schools Venture Fund. One of Students Matter’s funders is an undisputed heavyweight on the scene, The Broad Foundation. Founder Eli Broad co-founded KB Home, was the CEO of SunAmerica (which he sold to AIG), and is one of the billionaires to sign Bill Gates and Warren Buffett’s “Giving Pledge,” promising to dedicate 75 percent of his wealth to charity during or after his lifetime. Reading the Broad Foundation’s list of recent investments is like reading a list of “who’s who” in the public school reform movement—investees include charter management companies like the Kipp Foundation and Green Dot Public Schools, education “labs” like the Harvard University Education Innovation Laboratory, and assorted policy and advocacy think tanks. Students Matter’s chops are further demonstrated by the composition of its advisory committee, which includes players such as StudentsFirst, led by the barnstorming former chancellor of the District of Columbia Public Schools, Michelle Rhee.

We’ll keep an eye on this lawsuit in an area of the country where the education reform movement has what it lacks in many other regions: deep pockets and a growing base of influential dissidents. – Paula Smith Arrigoni