Unique Needs of Veterans in Rural Areas Taken Up by HAC

Updating our story from earlier this week, the nonprofit Housing Assistance Council—despite its name, a stellar advocacy organization on rural conditions far beyond housing—just held a summit on rural veterans’ issues. HAC’s research reaches the conclusions that many have, including Nonprofit Quarterly, that veterans in rural areas face a number of special challenges. According to Leo Shane III, writing for the Military Times, “Veterans in rural areas are generally older (median age 62) than the overall veterans population (median age 40) and more likely to own their own homes, but less likely to have easy access to a variety of federal health care and employment offerings.”

By the VA’s own data, the portrait of rural veterans suggests income and access challenges and a variety of health needs: 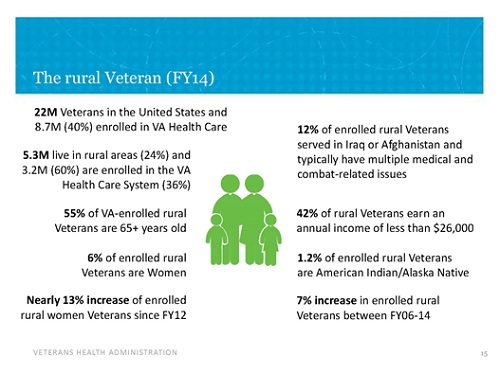 In a PowerPoint prepared for a HAC webinar earlier this month on rural veterans issues, the VA Health Administration’s “footprint” was described as 144 VA hospitals, 14 health care centers, 754 community-based outpatient clinics, 135 community living centers, 108 residential rehabilitation programs, and 264 “other outpatient service sites” such as single service clinics, dialysis centers, mobile medical units, etc. It seems, however, that politicians in many states are suggesting that VA programs meant to enable veterans in rural areas to go to private healthcare providers if they would otherwise face a 40-mile distance to the nearest VA facility aren’t well publicized or, for veterans who know about them, aren’t being administered flexibly enough to make them as widely available as they should be.

VA Secretary Robert McDonald and Senator Jerry Moran (R-KS) recently had a contretemps at a Senate hearing amid Moran’s charges that the VA was dragging its feet in implementing the Veterans Access, Choice, and Accountability Act of 2014. McDonald’s response was that he was limited by the statute regarding what he could or could not do. Rep. Evan Jenkins (R-WV) was recently joined by 15 other members of Congress in writing a letter to the VA to say that the agency hadn’t sufficiently prioritized the needs of rural veterans.

Some of the continuing criticisms of the VA might be political, as the VA sometimes simply cannot get out of its own way making an easy target—and that many of the rural members of Congress just happen to be red-state Republicans. For example, Senator Kristi Noem’s (R-SD) bill to prohibit the VA from spending money to shut down or reduce services to rural veterans at the VA’s Hot Springs, South Dakota facility seems to be prophylactic at best. However, the lack of resources for rural veterans and the consistent reports that they don’t know about programs available to them suggests that the VA ought to do a better job of outreach. Nonprofits like HAC that are putting effort into ginning up support and resources for rural veterans deserve applause for paying attention to an issue that typically doesn’t get much coverage outside of rural areas, which do not have powerful media outlets to promote their needs.—Rick Cohen