On Monday, large crowds protesting a proposed ban on abortion in Poland attracted many thousands, surprising even the organizers. By Wednesday night, Polish parliamentary leaders heard the protests and ended consideration of the bill.

Poland already has some of the most restrictive abortion limits in Europe. Abortion is already illegal except in cases of rape, incest, danger to the mother’s life or irreparable damage to a fetus, but the particularly dangerous bill in front of the new, conservatively controlled legislature would have imposed penalties for all abortions without exception in the form of jail time of up to five years for both women and their doctors. This could have endangered innumerable women, who would have found it far harder to access maternal health care. Many worry that the new law would have deterred doctors from taking part even in medically needed procedures that could end in miscarriage. Amnesty International called the proposal “a dangerous backward step for women and girls.”

The proposal has been in committee after it was “adopted in principle by a large majority in parliament” in September. This momentum led to Black Monday’s strikes and massive protests, estimated as high as 17,000 in the rainy streets of Warsaw alone. Overall, 100,000 women and men dressed in black participated in the gatherings that occurred in Gdansk, Wroclaw, and elsewhere across the predominately Catholic nation, leading to “widespread disruption to businesses, traffic and to government offices.” Other demonstrations were held in New York, the UK, Sweden, France and India.

“We are aiming for the parliament majority to see how angry we are and get scared. We are not asking, and we are not hoping,” Marta Lempart, an organizer, wrote to Newsweek in an email. “We also want the parliament majority to know that they are not going to get away with this. If that is the start of their fall, let it be. After that, the next and every other government will know not to anger Polish women.”

By Wednesday, Senate speaker Stanislaw Karczewski had acknowledged that the upper house of parliament was not intending to begin work on readying the abortion ban proposal for consideration. And apparently, the Justice and Human Rights Committee of the Parliament recommended the whole parliament reject the bill. Last night, the ruling Law and Justice Party (PIS) withdrew the bill.

The minister of science and higher education, Jaroslaw Gowin, says that the protestors have “caused us to think and taught us humility.”—Ruth McCambridge 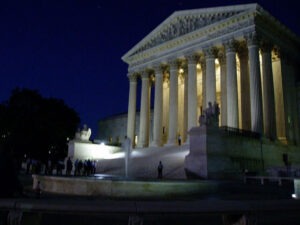 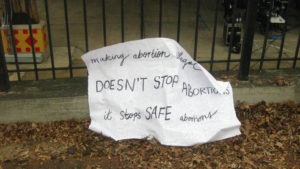