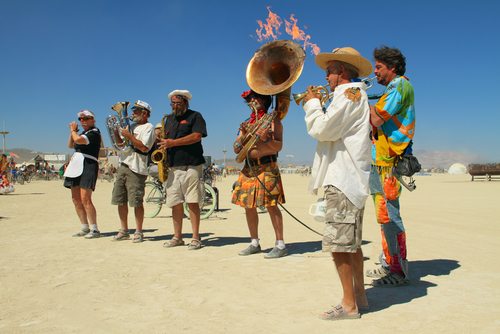 Sometimes you can’t tell a book by its cover. What is your image of the Burning Man festival in the Nevada desert? The Washington Post’s Suzy Khimm noted Burning Man spectacles such as “a thunderdome battle between a couple in tiger-striped bodypaint…(and) a man dressed as a gigantic blueberry muffin on wheels.” According to Burning Man co-founder Larry Harvey, the underlying values are “old-fashioned capitalism.” Harvey says that the festival could be “the poster child” of “old-fashioned Main Street Republicanism.”

In an effort to bolster its finances last year, Burning Man reorganized from an LLC to a 501(c)(3) public charity, but its “hippie debauch” image is receding. Apparently, Harvey is now a fan of Richard Florida’s ideas about creative communities of artists at the core of urban revitalization, telling Khimm, “Cities everywhere are calling for artists…We want to extend the civil experiment—to see if business and art can coincide and not maim one another.”

Harvey and his colleagues exercised their (c)(3) lobbying rights by completing a full swing of Capitol Hill lobbing in Washington, including throwing a bash at Tortilla Coast for congressional staff. He says that they attracted something of an equal split of Democrats and Republicans. Harvey claims that he wasn’t lobbying for money, so what else was he looking for?

Perhaps it is the fact that the Department of Interior’s Bureau of Land Management (BLM), which oversees the federal land where Burning Man is held, recently placed the festival on probation for exceeding the BLM’s 50,000 person crowd limit. In 2011, Burning Man exceeded the crowd limit by 4,000, and is now asking for a revised crowd limit of 58,000. The Burning Man argument is that its violation of last year’s crowd limit should be ignored and it should get a new permit for 58,000—to increase to 70,000 over the next five years. The 50,000 cap was set in 2006. For its part, the BLM cited problems of traffic, air quality, and garbage as concerns about the festival, which sold out for the first time in 2011.

As a modern organization extolling old-fashioned Republican free enterprise values, Burning Man seems to have transitioned from its San Francisco beach frolics in the late 1980s—or has it?—Rick Cohen