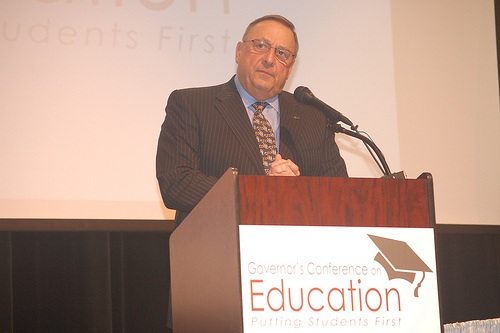 Things are boiling over in the far northeastern corner of our nation, as a period of extreme rancor in the Maine legislature continues. Most recently, the Senate failed to overturn three more of Governor LePage’s vetoes of Democratic-sponsored bills. This brings the total number of vetoes that the House has failed to override this session to 20.

One veto was of a bill that would have required all charter schools in the state to be nonprofit. NPQ has been tracking this argument for a while, demonstrating that there are a number of ways in which private organizations are taking public tax dollars. This bill, which was backed by as many as 97 legislators but was still four votes short of the number required for the override, would have ensured that taxpayer dollars intended for the education of students in the state would be used for that purpose, not for the profit of a few individuals.

Still, as reported in the Bangor Daily News, Gov. LePage misrepresented the bill when crowing about his victory, stating that it is about time the legislature got over it and followed the lead of other states in supporting charter schools. Gov. LePage said that the bill was intended to maintain “the educational status quo and prevent students from options that fit their needs.” Far from it, said the sponsor of the bill; the legislation was not drafted to stop charter schools, only to prevent for-profit corporations from running them. Gov. LePage might do well to look to other states like Louisiana where, as reported recently by NPQ, the State Supreme Court recently ruled that it was unconstitutional to pay for private schools by diverting funds from public schools.

The House also failed to override another LePage veto that would have encouraged students to take a career interest assessment prior to registering for classes at Maine community colleges or universities. A third veto that the House did not override was not education-related, but was intended to support local logging and loggers.

What may be the most interesting part of the story, however, is the level of dishonest and vitriolic dialogue around the charter school bill in Maine. Recently, when promising to veto many elements of the State Senate’s proposed budget, Gov. LePage suggested that a senator “claims to be for the people, but he’s the first one to give it to the people without providing Vaseline.” Realizing immediately that he had said something inappropriate, the governor did not recant, but merely stated that while the comment is not politically correct, Senator Jackson is a “bad person,” and has a “black heart.” The rape metaphor used by the governor has drawn a lot of criticism from many sides, including several fellow Republicans in Maine. Let’s hope the state’s motto, “I Direct,” does not come to pass, with other states following this lead.—Rob Meiksins