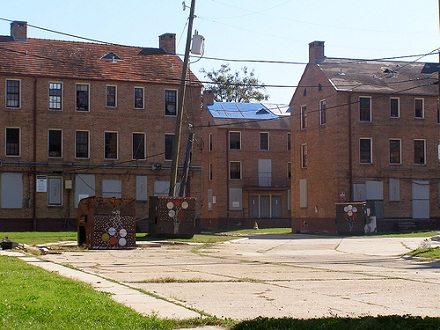 Randy Shaw has published a review of a book with a tough message for nonprofits to hear. John Arena, identified by Shaw as a longtime New Orleans labor and community activist, sees complicity, if not conspiracy, in the activities of nonprofit organizations and foundations – before Hurricane Katrina – in displacing black households from and then demolishing public housing. Although he acknowledges that white Republicans plus black political leaders and the city’s Democratic machine were all parties to the strategy, the subtitle of his book, “Driven from New Orleans,” makes it clear who and what he thinks deserves some major responsibility and blame: “How Nonprofits Betray Public Housing and Promote Privatization.”

For Arena, nonprofit groups acted as “wolves in sheeps’ (sic) clothing, as the Trojan horse of neoliberalism” for their “central role” in the city’s agenda of displacement and privatization. The pre-Katrina instrument they used was HUD’s HOPE1 program, ostensibly meant to revitalize and improve public housing by demolishing and replacing units, but there was never a one-for-one replacement commitment. Shaw contends that HOPE1 wasn’t intended to revitalize public housing, but “to facilitate gentrification by displacing low-income residents.”

Shaw calls Arena’s telling of the “manipulation and selling out” of black tenants by nonprofits aligned with developers to get them to agree to their own evictions “extremely powerful, and flat out infuriating.”

Shaw is more impressed with Arena’s analysis of the pre-Katrina HOPE1 dynamic than with his telling of the post-Katrina story. He suggests that after the Hurricane, even if nonprofits had wanted to stop the demolitions, “the political drive for demolition coming from the White House, the governor’s office, the mayor, and the New Orleans City Council made efforts to stop demolitions nearly impossible.” Arena apparently criticizes Louisiana ACORN for its avoidance of the issue of public housing demolitions after Katrina, which he attributes to ACORN’s role as a HUD grantee, though Shaw offers an alternative explanation. He says that ACORN was simply overwhelmed with dealing with the problems caused by Hurricane Katrina and most ACORN members didn’t live in public housing.

Despite Shaw’s disagreement with Arena in his post-Katrina analysis, he finds some of the issues involving nonprofits in their allegiances with politicians and developers to be troubling: “Yes, many nonprofit groups do stifle activist dissent and undermine the power of poor people to get results through disruption and protest,” Shaw writes. “True, many foundations only fund ‘responsible’ groups unwilling to engage in the ‘by all means necessary’ approach more likely to bring success.”

Can NPQ Newswire readers give us their take on the performance of nonprofits and foundations in the pre- and post-Katrina treatment of poor people, low-income housing, and public housing in New Orleans? Is Arena on to something that hasn’t been aired – and should be – or is he blaming the wrong culprits for the displacement of the public housing (and black) population of New Orleans? ­–Rick Cohen