Helping Ukraine: What Should Donors and Nonprofits Do? 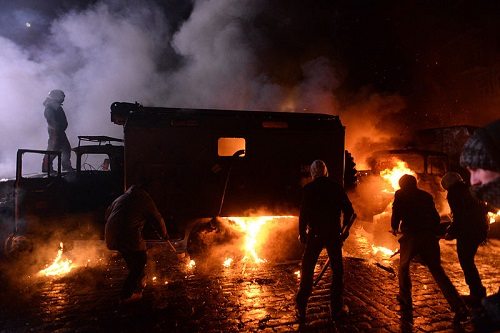 In the wake of what appears to be an official Russian military incursion into Russian-speaking parts of the Ukraine such as the Crimea (after days of military actions by soldiers wearing uniforms with no markings of any particular country), Americans are trying to figure out what to do. While the U.S. government explores its few options, ordinary Americans are responding as they typically do—through charitable giving. For example, the Hopeful Hearts Foundation, based in Louisville, Kentucky, is shipping food, clothing, and medication to orphans in orphanages and transitional living homes in Simferopol, the capital of the Crimean region of the Ukraine. Though the faith-based ministry, which started in 2002, has since expanded to Haiti, India, Myanmar (Burma), and Sri Lanka, its roots in the Ukraine makes it not unexpected that they would respond, especially given their substantial operations in the Crimea.

There will be responses from cities and regions throughout the U.S. with large Ukrainian communities, including New York, Philadelphia, Detroit, and Indianapolis. Of the top 29 U.S. communities with the largest proportions of the population claiming Ukrainian ancestry, 19 are in Pennsylvania. Not surprisingly, in the wake of the Russian military action, the nonprofit Ukrainian Community of Western Pennsylvania scheduled a benefit concern to help the victims of violence in Kiev, the capital of the Ukraine. With the ongoing turmoil in the country, the concert organizers don’t know how they will be able to send the concert proceeds to the Ukraine or how the resources might be deployed.

Like the U.S. government, most Americans don’t quite know what to make of the Ukrainian crisis, though Russia’s military action against a sovereign nation on its borders is a clear violation of international law, notwithstanding whatever Russian President Putin might think about the danger to Russian-speakers in the eastern Ukraine and the Crimea from Ukrainian “ultranationalists,” as he told President Obama. What should U.S. nonprofits—and American donors—do as they watch events unfold?

First, get educated about what’s going on there. The deposed Ukrainian president, Viktor Yanukovich, was a horror show, apparently even disliked by Putin, though Putin is sort of stuck with him. But Yanukovich’s top opponent, former president Yulia Timoshenko, released from jail just last week, was a disaster herself when in charge of the government. However, she has more charismatic street appeal than ten Yanukoviches put together. Putin is doing in the Crimea and in the east what it did in Georgia with the support of Russian-leaning client states named Abkhazia and South Ossetia and in Azerbaijan with the state of Nagorno-Karabakh. It is standard strategy for Putin’s Russia as well as Putin’s predecessors throughout history, creating a wedge to justify the presence of Russian troops or even military actions. But the debate in the Ukraine is more complex than a power play being fought by chess players named Putin and Obama using Ukrainians as pawns.

Second, given the fluidity of the situation throughout the country, nonprofit aid interventions should be carefully thought out. Fundraisers should be careful about who they are raising money for, and for what. Listening to NGOs with a strong presence in delivering humanitarian aid in the Ukraine, such as the International Committee of the Red Cross with its relationship with the Ukrainian Red Cross, is vital. While there are important humanitarian aid issues for donors and nonprofits, this is not a situation like Syria’s, with millions of refugees facing starvation. Unless the Russian incursion leads to a military response, like the brief war between Russia and Georgia, some of the nonprofit response to the Ukraine should be to support independent journalists and to support international monitors who presence might be hugely important for protecting the interests of Ukrainian civilians. Protecting and strengthening the Ukraine’s fragile democracy may be the big challenge of the moment.

Third, nonprofits and donors listen attentively to the voices of ordinary Ukrainians and not get caught up with the notion that oligarchs speak for the country. Like the Russian oligarchs, the Ukrainians have their collection of high rollers who are likely to have continued access to American philanthropists. The reality is that some of these Ukrainian oligarchs have been doing quite well under Yanukovich and his predecessors. Threats from the U.S. and the E.U. to freeze their overseas assets and deny them visas may have had as much to do with Yanukovich’s departure as the street protests on the Maidan. When press headlines suggest that the future of the Ukraine depends on the decisions of its “business elites,” with billionaires accepting appointments to interim government positions, alarm bells should ring. Whether the oligarchs favor the Russians or not, it is as Eurasia expert Lauren Goodrich observes: “There’s no ideology…It’s all about the money and the self-preservation of their own respective empires.”—Rick Cohen