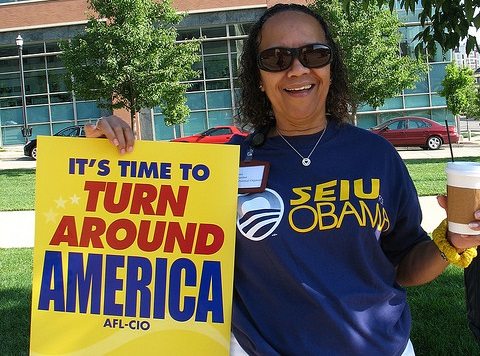 Vice President Joe Biden pulls few punches. Just ask President Obama, who had to get off his noncommittal public stance on LGBT marriage when Biden sort of forced the issue. This week, in the wake of President Obama’s assigning Biden to chair a task force on job training (and issuing an executive memorandum that did not use the word “union” once), the Vice President gave a speech at the annual meeting of the United Auto Workers that was as pro-union as almost anything that anyone from the Obama administration has ever uttered.

Biden told the UAW assemblage that collective bargaining is the “bedrock of our economy,” that “labor built the middle class,” and that, referring to unions, “You guys are the only guys keeping the barbarians at the gate.” Now, tell us what you really think, Joe!

Given that Vice President Biden is now in charge of a task force to generate ideas on job training programs that work for the parts of the economy that are likely to grow jobs, are his strongly pro-union statements at the UAW conference consistent with the task force deliberations? Here is the Bureau of Labor Statistics review of the occupational categories likely to show the largest proportional and absolute employment increases between 2012 and 2022. It would appear that the VP is reminding the unions that they have organizing challenges ahead:

While the president’s speech seemed to imply a focus on job creation in the “knowledge-driven” part of the economy, which tends to be not particularly strongly unionized, the largest areas of job growth during the next decade—personal care aides, home health aides, registered nurses, retail salespersons, food preparation and serving workers, nursing assistants, and secretaries and administrative assistants—are all battleground occupations for organized labor, including for unions such as the UAW that have expanded far beyond their original labor constituencies.

In essence, the challenge depends on one’s impressions of the role of unions. Conservatives and many employers think that unions stand in the way of certain kinds of job and economic growth, while an alternative perspective is that union organizing, collective bargaining, and union membership have been the instruments that thrust much of working-class America into the middle class.

If you recall the emphasis in both the president’s State of the Union and his executive memorandum on job training, there was a strong call for apprenticeships. On the AFL-CIO website, the standard-bearer of organized labor in the U.S. describes job training and apprenticeships as “at the heart of unions’ efforts to ensure that working men and women have a voice in our country’s ever-changing economy” and claims that unions train more than 450,000 workers annually. During the SOTU, Elizabeth Shuler, the Secretary-Treasurer of the AFL-CIO tweeted that unions are the second-largest provider of training in the U.S. next to the U.S. military, though the task force doesn’t make that point.

Perhaps Vice President Biden was reminding the unions that despite their absence from the president’s job training memorandum, organized labor has a role to play in the emerging, job-creating occupations of the economy to ensure that those workers get the kinds of workplace protections that they need and deserve. From a 501(c)(3) nonprofit perspective (as opposed to a 501(c)(5) union perspective), the BLS chart might be seen as identifying the top occupations in which nonprofits and unions alike should be focusing their job training and job placement activities—and hopefully with their collective bargaining and workplace rights protected.—Rick Cohen